I mentioned a couple of weeks ago that I heard Lisa Yee speak at the Missouri SCBWI Conference. She was hilarious, and I was sure her books would be, too. Well, I started with her first–MILLICENT MIN, GIRL GENIUS, which earned the Sid Fleischman Humor Award–and am happy to share it as part of Marvelous Middle Grade Monday. 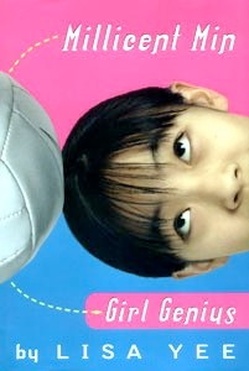 Millicent Min is having a bad summer. Her fellow high school students hate her for setting the curve. Her fellow eleven-year-olds hate her for going to high school. Her grandmother Maddie is moving away. And in an effort to give Millicent a more “normal” childhood, her mom has not only signed her up for volleyball, she’s also arranged for Millie to tutor Stanford Wong–jock, jerk, and poster boy for Chinese geekdom.

But when Millicent meets Emily, things start to look up. Emily doesn’t know Millicent’s IQ score. She actually thinks Millie is cool. And if Millie can hide her awards, ignore her grandmother’s advice, blackmail Stanford into silence, learn to serve a volleyball over the net, stop her parents from embarrassing her forever, and keep all her lies straight, she just might make her first friend.

1. The humor – It did win an award for humor, so it makes sense. It’s not slapstick or gross. It’s a more intelligent humor, and yet Millicent is funny when she doesn’t intend to be and vice versa. Here’s a sample from the first chapter:

“As I emptied the contents of my locker into my briefcase earlier in the day, I had been optimistic that someone might ask me to sign their [yearbook]. In anticipation of this, I had drafted a truly original inscription–one that would showcase my sense of humor, something I have had little chance to share with my fellow students. I would start with Quantum materiae materietur marmota monax si marmota monax materiam possit materiari? Which, translated from Latin, means ‘How much wood would a woodchuck chuck if a woodchuck could chuck wood?’ And then, here’s the really funny part, I’d close with Vah! Denuone Latine loquebar? Me ineptum. Interdum modo elabitur. In English, that’s ‘Oh! Was I speaking Latin again? Silly me. Sometimes it just sort of slips out.’ I would then finish with a flourish, ‘Signed, Millicent L. Min.’”

2. The character arc – At the beginning, Millicent believes the reason she doesn’t have any friends is because she’s a genius, but as you can see from the above, Millicent has a rather elevated opinion of herself. It’s clear to the reader that although Millicent thinks she knows everything–and she does have a ton of head knowledge–she’s clueless when it comes to interacting with other people. Sometimes she comes across as unlikeable. She reminds me of Dr. Brennan on the show “Bones.” She has to learn that there’s more to life than school and knowledge.

4. Maddie – Until she meets Emily, Millicent’s grandma Maddie is her best friend. I loved how she discovered about halfway through the book that Maddie’s words of wisdom were quotes from Bruce Lee movies. Maddie is a kooky character with a great deal of actual wisdom under the cheesy quotes. I really enjoyed her.

There are three other books in this series, and I plan to pick them up at some point. Has anyone else read Lisa Yee? If so, tell me what you thought!

Subjectivity and Why You Should Get Multiple Opinions

When I showed my middle schooler the list of #the2

The premise for @marti.leimbach’s DRAGONFLY GIRL

Happy birthday to my main character, Jenny! While

I’m so thrilled to reveal the cover of YOUR LIFE

Congratulations to these amazing #the21ders middle

It’s so appropriate that the first book I finish