I saw a few people posting the debuts they’re most anticipating in 2015 and thought, you know, I want to jump on that train! Because I have some writing friends/acquaintances with books coming out this year, and I’m really excited about that. Besides, I’m not going to have any reviews for a couple of weeks because I’m catching up on some adult reading thanks to Christmas gifts :). So, here we go.

First of all, I have to give a shout out to my 2012 Writer’s Voice Team Captain Krista Van Dolzer, who has not one but TWO books coming out in 2015. I’ve already pre-ordered THE SOUND OF LIFE AND EVERYTHING, and you should, too! Here’s the gorgeous cover and description:

Twelve-year-old Ella Mae Higbee is a sensible girl. She eats her vegetables and wants to be just like Sergeant Friday, her favorite character on Dragnet. So when her auntie Mildred starts spouting nonsense about a scientist who can bring her cousin Robby back to life, Ella Mae doesn’t believe her–until a boy steps out of the scientist’s pod and drips slime on the floor right before her eyes.

But the boy is not Robby–he’s Japanese. And in California in the wake of World War II, the Japanese are still feared and mistreated. When Auntie Mildred refuses to take responsibility, Ella Mae convinces her mama to take the boy home with them. It’s clear that he’ll be kept like a prisoner in that lab, and she wants to help.

Determined to do what’s right by her new friend, Ella Mae teaches him English and defends him from the reverend’s talk of H-E-double-toothpicks. But when the boy’s painful memories resurface, Ella Mae learns some surprising truths about her own family and, more importantly, what it means to love.

THE SOUND OF LIFE AND EVERYTHING comes out in May, and Krista’s second book, DON’T VOTE FOR ME, will be out in August. I’m so excited for Krista!

In keeping with the Team Krista theme, one of my Team Krista teammates, who also was so kind as to beta-read one of my manuscripts, will also debut this year. Anna-Marie McLemore’s THE WEIGHT OF FEATHERS is about two teenagers from rival families of traveling performers who fall in love despite impossible odds. Doesn’t that sound amazing?? I wish there was a cover for me to share. The fall is so far away! In the meantime, you can follow Anna-Marie on Twitter for updates.

Another author who has encouraged me is Kelly Loy Gilbert, and I’m especially excited about her book because I love to read anything that explores faith. CONVICTION comes out in May, and I’ll be picking it up as soon as I can get my hands on it! Here’s the cover and description:

“Now faith is the assurance of things hoped for, the conviction of things not seen.”

Ten years ago, God gave Braden a sign, a promise that his family wouldn’t fall apart the way he feared.

But Braden got it wrong: his older brother, Trey, has been estranged from the family for almost as long, and his father, the only parent Braden has ever known, has been accused of murder. The arrest of Braden’s father, a well-known Christian radio host, has sparked national media attention. His fate lies in his son’s hands; Braden is the key witness in the upcoming trial.

Braden has always measured himself through baseball. Now the rules of the sport that has always been Braden’s saving grace are blurred, and the prospect of playing against Alex Reyes, the nephew of the police officer his father is accused of killing, is haunting his every pitch.

Braden faces an impossible choice, one that will define him for the rest of his life, in this brutally honest debut novel about family, faith, and the ultimate test of conviction.

I mean, faith, baseball, impossible choices? Right up my alley!

This last one isn’t someone I know personally, but I’m excited because it’s another book I first encountered in a contest. I’ve wanted to read MONSTROUS by MarcyKate Connolly ever since I read the query and first page in The Writer’s Voice in 2012, so I will definitely be picking this up in February. Here’s the cover and blurb: 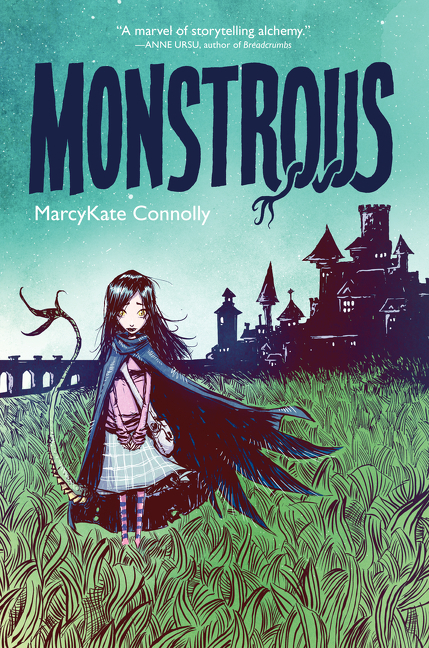 The city of Bryre suffers under the magic of an evil wizard. Because of his curse, girls sicken and disappear without a trace, and Bryre’s inhabitants live in fear. No one is allowed outside after dark.

Despite her caution, a boy named Ren sees Kym and begins to leave a perfect red rose for her every evening. As they become friends, Kym learns that Ren knows about the missing girls, the wizard, and the evil magic that haunts Bryre.

And what he knows will change Kym’s life.

So there you have it–a few debuts I can’t wait to read this year. Unfortunately I have to wait until fall for two of them! Unless I can get my hands on ARCs … hmm. What debuts are you anticipating in 2015? Or other books?