Wow, I can’t believe it’s been more than a month since I’ve written a review. But then, I read a few adult books in the past month, and I don’t review those on the blog, so we’ll use that as part of my excuse. Moving on …

After starting a book I really wanted to like and just couldn’t get into, I decided to pull a book out of my Scholastic Warehouse Sale box that I was sure to like because I’ve loved every other book by this author. So today I’m reviewing THE DISTANCE BETWEEN US by Kasie West. 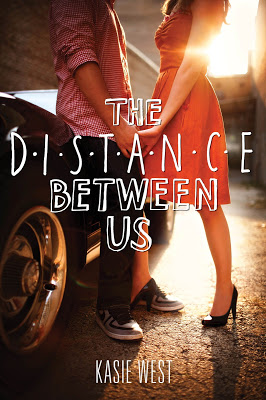 Seventeen-year-old Caymen Meyers learned early that the rich are not to be trusted. And after years of studying them from behind the cash register of her mom’s porcelain-doll shop, she has seen nothing to prove otherwise. Enter Xander Spence: he’s tall, handsome, and oozing rich. Despite his charm and the fact that he’s one of the first people who actually gets her, Caymen’s smart enough to know his interest won’t last. But just when Xander’s attention and loyalty are about to convince Caymen that being rich isn’t a character flaw, she finds out that money is a much bigger part of their relationship than she’d ever realized. With so many obstacles standing in their way, can she close the distance between them?

1. The humor – I’m partial to sarcastic humor, so the main character in this novel is a perfect fit for me. I was chuckling through the whole thing. Here’s a short snippet when Xander has just asked her what kind of doll to buy for his grandmother.

“I’m partial to the eternal wailers.”

I point to the porcelain version of a baby, his mouth open in a silent cry, his eyes squeezed shut. “I’d rather not see their eyes. Eyes can say so much. Theirs say, ‘I want to steal your soul so don’t turn your back on us.'”

2. The romance – I love the tension in this romance. It was a great mix of internal struggle with Caymen’s built-in rich boy issues and run-ins that kept making each of them second-guess how interested/involved the other person was. I believed neither would be ready to fully commit until the end.

3. The twist – There was a side plot running throughout the story with Caymen’s mom, and I had an inkling of what it was, but even though I figured out part of it, there was still a surprise twist that got me. So well done, Ms. West!

4. The hunt for the future – I wasn’t quite sure how to title this point, but I think a lot of teenagers believe they must have everything figured out by their senior year, and you don’t always know when you head off to college what you want to do with the rest of your life. I liked that these characters were still trying to figure it out.

5. Caymen’s growth – This book says it’s Pride and Prejudice meets Pretty in Pink, and I can see that. Caymen definitely had to get over both her pride and her prejudice in order to be with Xander. Considering where she started out, I wasn’t sure she would!

Well, this was the last book of Kasie West’s I hadn’t yet read. Fortunately she has another one coming out this summer, so I won’t have to wait long for another.

Quick Tip: Listen to Your Manuscript WITHOUT Reading Along

The Joy of Reading Alongside Your Child