It’s no secret I love Kasie West’s books. They’ve consistently been among my favorite reads in previous years. I haven’t really thought about my list for 2017 yet (although I should start!), but there’s a good chance this latest book will be included. LUCKY IN LOVE is a complete delight. Without any further ado, here’s the cover and description. 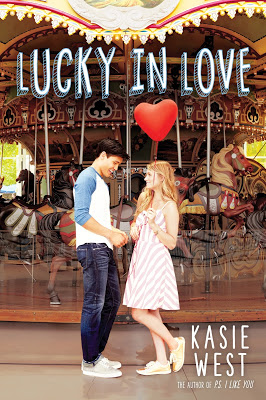 Maddie’s not impulsive. She’s all about hard work and planning ahead. But one night, on a whim, she buys a lottery ticket. And then, to her astonishment—

In a flash, Maddie’s life is unrecognizable. No more stressing about college scholarships. Suddenly, she’s talking about renting a yacht. And being in the spotlight at school is fun…until rumors start flying, and random people ask her for loans. Now Maddie isn’t sure who she can trust.

Except for Seth Nguyen, her funny, charming coworker at the local zoo. Seth doesn’t seem aware of Maddie’s big news. And, for some reason, she doesn’t want to tell him. But what will happen if he learns her secret?

And here are the five things I loved most.

1. The dialogue – I love the interaction between Maddie and Seth. It’s so adorable I had to re-read it sometimes. Here’s an example.

Seth put his arms out to either side. “Hold the phone, Maddie.”

“Hold the phone? Did you really just say that?”

“You can have it. It’s up for grabs from where it was left in nineteen seventy.”

“People have used it more recently than nineteen seventy.”

2. The premise – I mean, what would you do if you won the lottery? I really liked how Kasie West handled it. There’s a range of reactions from those around Maddie, from those who who are clearly just after her money to those who seem unphased by her improved financial situation. I thought it was all very realistic.

3. Maddie’s family – I thought the portrayal of Maddie’s family was also quite authentic. I’m biting my tongue here because there’s something I really want to say about how the lottery affects the family, but I’ll just let you all read it, and I’m sure it will be obvious to you.

4. Maddie’s facts – I love how Maddie collects facts. It’s such a cute trait that singles her out. Maybe it also has to do with me liking interesting facts …

5. Maddie’s growth – I liked how Maddie figured herself out in the course of the story. She started out very influenced by everyone around her and had to discover who she was and what she wanted.

So, basically, another fantastic Kasie West novel. Go grab it!

Responses to “YA Review: LUCKY IN LOVE by Kasie West”