I’ve returned from Disney World, truly the most magical place in the world. I mean, my kids love it, but let’s be honest: half the Disney movies in our house belong to me. And where else can you meet Chewie? (Okay, yes, I could go to a Star Wars convention, but in my world, Disney is easier.) The last time we visited Disney, my kids were still young enough they had to nap in the afternoon and we took several-hour breaks. This time, our breaks were much shorter, so I didn’t read multiple books during the trip. However, I did finish one book on the way there. I only had five pages left when we got off the plane, so I stood in the Disney Express line finishing it while my family focused on making sure we moved toward the bus :). That book was THE FIXER by Jennifer Lynn Barnes, one of my Scholastic Warehouse Sale finds from this past December. 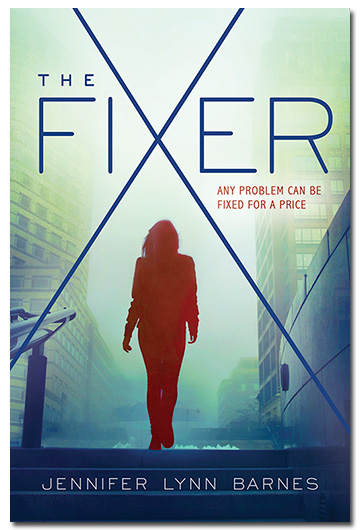 When sixteen-year-old Tess Kendrick is sent to live with her older sister, Ivy, she has no idea that the infamous Ivy Kendrick is Washington D.C.’s #1 “fixer,” known for making politicians’ scandals go away for a price. No sooner does Tess enroll at Hardwicke Academy than she unwittingly follows in her sister’s footsteps and becomes D.C.’s premier high school fixer, solving problems for elite teens.

Secrets pile up as each sister lives a double life…until their worlds come crashing together and Tess finds herself in the middle of a conspiracy with one of her classmates and a client of Ivy’s. Suddenly, there is much more on the line than good grades, money, or politics, and the price for this fix might be more than Tess is willing to pay.

1. The pacing – The short, cliffhanger chapters kept me reading well past my bedtime for several nights in a row. I didn’t want to put this book down, but there were several nights I just had to or end up re-reading what I was half-asleep for :).

2. The stakes – In line with the pacing, the stakes kept ratcheting up throughout the book. Every time a new development was introduced, the tension grew.

3. The twists – This book included a number of fantastic twists. Some were planted in such a way I anticipated them, but I’m not sure all readers would. Others were quite surprising.

5. Tess herself – I found myself equally frustrated with Tess for continuing to dig when I could see it was going to get her into trouble and wanting the information myself as a reader. I also thought the way Tess handled the situation in relation to Ivy made complete sense–trust has to be earned, and Ivy hadn’t earned her trust based on their past relationship.

This book was left hanging a bit, and I’ve already ordered the next one. I hope it’s a bit more tied up as I did a bit of research and saw that there isn’t a third one planned. However, I will be checking out more books by Jennifer Lynn Barnes since this one kept me turning the pages quickly!

A Love Letter to My Work-In-Progress

Responses to “YA Review: THE FIXER by Jennifer Lynn Barnes”