I’ve been on quite the reading/review spree lately! Honestly, though, it feels fantastic, because for a while I felt like I had read quite a few books that I liked but didn’t wholeheartedly love and want to review. Anyway, the cover of IN SOME OTHER LIFE by Jessica Brody first caught my attention, but I’ve also read other books by the author and so knew I would be in for a good story, especially once I read the description. Here goes. 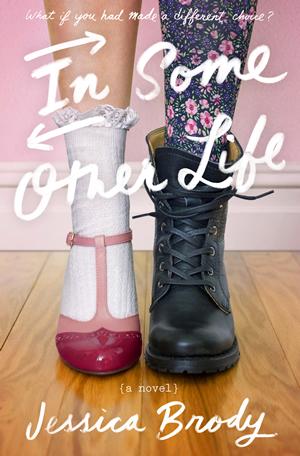 Three years ago, Kennedy Rhodes secretly made the most important decision of her life. She declined her acceptance to the prestigious Windsor Academy to attend the local public school with her long-time crush, who had finally asked her out. It seems it was the right choice—she and Austin are still together, and Kennedy is now the editor-in-chief of the school’s award-winning newspaper. But then Kennedy’s world is shattered when she walks in on Austin kissing her best friend and she wonders if maybe her life would have been better if she’d made the other choice. As fate would have it, she’s about to find out . . .

The very next day, Kennedy hits her head and mysteriously awakes as a student of the Windsor Academy. And not just any student: Kennedy is top of her class, she’s popular, she has the coolest best friend around, and she’s practically a shoe-in for Columbia University. But as she navigates her new world, she starts to question if this alternate version of herself is really as happy as everyone seems to believe. Or is it possible this Kennedy is harboring secrets and regrets of her own?

1. The premise – What if you could see how your life would look if you chose differently? Everyone has something in their life that they wish they’d done differently–because no one makes perfect choices all the time. But the trick is: would you really be better off? It’s such an interesting question. I loved watching it play out.

2. Frankie – I love Kennedy’s little brother. He’s the perfect constant in both worlds. It’s adorable how he keeps asking her questions to try and figure out how he’s different in the other reality, when what neither of them realizes is that she needs him to be the same.

3. Kennedy’s dad – I also love Kennedy’s dad and the role he plays, particularly in the original version of her life, but the contrast in the second life is an important part of her character growth. I just appreciate it when parents are portrayed in a positive light, and Kennedy’s dad is a really great character.

4. The newspaper – Kennedy’s devotion to her newspaper, The Southwest Star, is admirable on a couple of levels. One, it’s something she’s super-passionate about. And two, it shows her determination and dedication to succeed. These qualities manifest in both realities but result in different outcomes.

5. The ending – I have to admit I wasn’t completely satisfied with one aspect of the ending on the relationship side, but overall I really liked how the ending resolved from the point of Kennedy growing as a person and figuring out where she’d made mistakes in both realities so she could be stronger where she ended up. Can you choose a different life? Well, I’m not going to tell you the answer to that. But you can definitely choose to be a better person.

Is there some choice in your life you wish you could see the other option play out? There’s a particular post-graduate scholarship I went for that I feel like I tried the wrong route. I don’t regret it because if I’d gone the other route and gotten it, I might not have moved back to Missouri and met my husband. But I guess I’ll never know. That could have been my IN SOME OTHER LIFE!

ENCHANTÉE and A Few Other Books You Should Read

Responses to “YA Review: IN SOME OTHER LIFE by Jessica Brody”