Hi, friends! I’m on a giveaway spree! In case you’re curious about which two books I gave away from my 7th blogiversary giveaway last week, I ended up choosing two books with a connection to me. The first was THE GREAT SHELBY HOLMES by Elizabeth Eulberg, who is published by Bloomsbury, my publisher! And the second was MASCOT by Antony John, a fellow St. Louis author. But let me tell you, it was very hard to choose, especially since so many people who entered the giveaway just said any author would be great :).

Now on to this week. I’m thrilled to once again welcome my friend and critique partner Krista Van Dolzer to the blog with her latest release, THE MULTIPLYING MYSTERIES OF MOUNT TEN. And hey, it’s also published by Bloomsbury :). Here’s the amazing cover–which Krista’s going to talk about in answer to one of my questions–and description.

Twelve-year-old painter Esther can’t wait to attend Camp Vermeer, the most prestigious art camp around. But when her stepdad accidentally drives up the wrong mountain, she lands at Camp Archimedes–a math camp!

Determined to prove herself to the other campers, she tackles a brain-teaser that’s supposed to be impossible–and solves it in a single day. But not everyone is happy about it…someone wants her out of camp at any cost, and starts leaving cryptic, threatening notes all over the camp’s grounds. Esther doesn’t know who to trust–will she solve this riddle before it’s too late?

Featuring tricky logic puzzles readers can solve along with the characters and starring a unique, smart, and crafty young heroine, this story has just the right mix of mystery, humor, and wit.

Here are Krista’s answers to five questions about the things I loved most.

1. Readers who pick up this book may not realize Esther was a character in one of your previous books, DON’T VOTE FOR ME. What made you decide she needed her own story?

2. It’s evident within the book how much you love math—and how much disdain Esther initially has for the subject, despite her affinity for it. What was your inspiration for setting this story at a math camp?

Because I knew I wanted to write a fun math mystery, the math camp just made sense, but your question made me realize that some of Esther’s feelings are autobiographical. I was always good at math, but I didn’t really fall in love until I studied it in college. That might have been because, for the first time in my life, math wasn’t easy-peasy. It was challenging and stretching, and I actually had to apply myself. Doing something hard is great for your self-confidence.

3. The cover for this book is amazing! I love all of the detail, and I think it would be great if you could tell us a little about the significance of some of those details.

The cover is amazing. I absolutely love Danielle Ceccolini’s design, and Iacopo Bruno couldn’t have done a better job executing her vision. One of the first details I noticed was the sneaky yellow balls scattered around the illustration. In addition to the weight in the bottom right corner, the yellow balls make an appearance in the first puzzle in the book. I also love the tube of paint and the palette in the background that ties everything together, both of which, of course, are nods to Esther’s artistic side. And the ruler! And the compass! And the abacus in the title treatment! So many little details make my mathematical heart sing. 😊

4. The mystery in the story—interlocked with a logic puzzle—is super fun. What tips do you have for writing a mystery, particularly for a middle grade audience?

First tip: don’t write a mystery that involves a logic puzzle. 😊 Every time I fiddled with one clue, I had to fiddle with the others. Thank goodness for great copy editors who spotted so many mistakes!

Second tip: don’t be afraid to let your imagination loose. Adults dismiss so many clues to so many would-be mysteries because they don’t want to take the time to try to figure them out, but kids always take the time. They want to find something extraordinary hidden in the ordinary, so let’s give them just that!

5. I love the group of math nerds. How did you go about developing the personalities of the kids who would be at the camp? Did you create them to complement Esther or develop them independently of her?

Getting to know the math nerds was one of the best parts of writing this story. Angeline and Brooklyn distinguished themselves right off the bat, and Munch, Graham, and Marshane came along easily, too. I loved how self-assured Munch was from the very start, and the friendly rivalry that developed between Graham and Marshane inspired me to make their back stories overlap. So I would say I let their personalities take shape as the plot grew and evolved. By far, the trickiest part was making sure they were distinct (and in fact, we downplayed some roles so this most important group would have a better chance to shine). 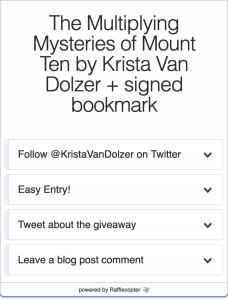 I love this book so much I want to pass along a copy to one of you, and Krista has also offered a signed bookmark as well. To enter, comment below or click on the Rafflecopter link for additional entries.

Happy 7th Blogiversary to Me! With a mystery signed book giveaway!

YA Review: FINALE by Stephanie Garber 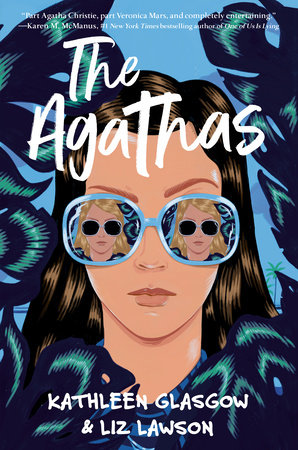