I have a bit of a book hangover as I’m writing this because I stayed up until after midnight to finish reading FINALE, the final book in Stephanie Garber’s best-selling Caraval series. I’m not surprised, though. Each of the books in this series have been impossible to put down, so when I learned Stephanie was coming to town, I made a point of getting to her event, even though I had a commitment for one of my kids right before. As a result, I was the very last person in line to get my books signed, but it was worth it, and I now have a complete signed set of Caraval books. If you haven’t read this series, then you’re in luck because it’s now finished and you won’t have to wait for any of them like I did :). Start with CARAVAL, next comes LEGENDARY, and then FINALE. 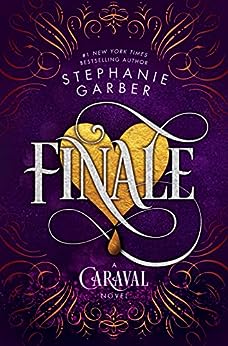 A love worth fighting for. A dream worth dying for. An ending worth waiting for.

With lives, empires, and hearts hanging in the balance, Tella must decide if she’s going to trust Legend or a former enemy. After uncovering a secret that upends her life, Scarlett will need to do the impossible. And Legend has a choice to make that will forever change and define him.

Caraval is over, but perhaps the greatest game of all has begun. There are no spectators this time: only those who will win, and those who will lose everything.

Welcome, welcome to Finale. All games must come to an end…

If you haven’t read the first two books, you might want to stop here because this review could be spoilery.

Here are the five things I loved most about FINALE.

1. The twists – I saw some of the twists coming in this book, but I think that’s because I’d already read the first two books in the series and was anticipating them. Stephanie Garber still managed to surprise me with quite a few twists, though, and it’s what makes these books so hard to put down.

2. The love triangle – Honestly, I’m not always a huge fan of love triangles. I usually have a really clear idea of who the character should end up with and just want them to decide already. However, there was enough frustration with all points of this triangle for me to be okay with the ongoing indecision and the final resolution worked for me.

3. The Fates – If you’ve read LEGENDARY, you probably, like me, expect the Fates to be all evil in this book. A lot of them definitely are, but I enjoyed how nuanced they were as characters overall. That’s really all I want to say to avoid spoiling anything about that.

4. The quest – While there wasn’t a Caraval in this book, there was still a quest to complete, and just like in Caraval, the rules kept changing and the stakes kept ratcheting up.

5. The ending – You know how when you pick up certain books you have a pretty good idea how they’re going to end? With this book, I really wasn’t sure. I was only about sixty percent on how the love triangle would turn out and wasn’t placing any sort of bets on where things were going with Valendia. I loved that Stephanie Garber was able to keep me guessing and leave me satisfied with the ending.

Have you read FINALE yet? What did you think?

YA Review: FAME, FATE, AND THE FIRST KISS by Kasie West

Responses to “YA Review: FINALE by Stephanie Garber”