I have quite a mix of books in today’s review roundup–YA time travel, adult dual timeline, contemporary middle grade, YA historical fiction, and YA contemporary. So that should offer a little bit of something for everyone! 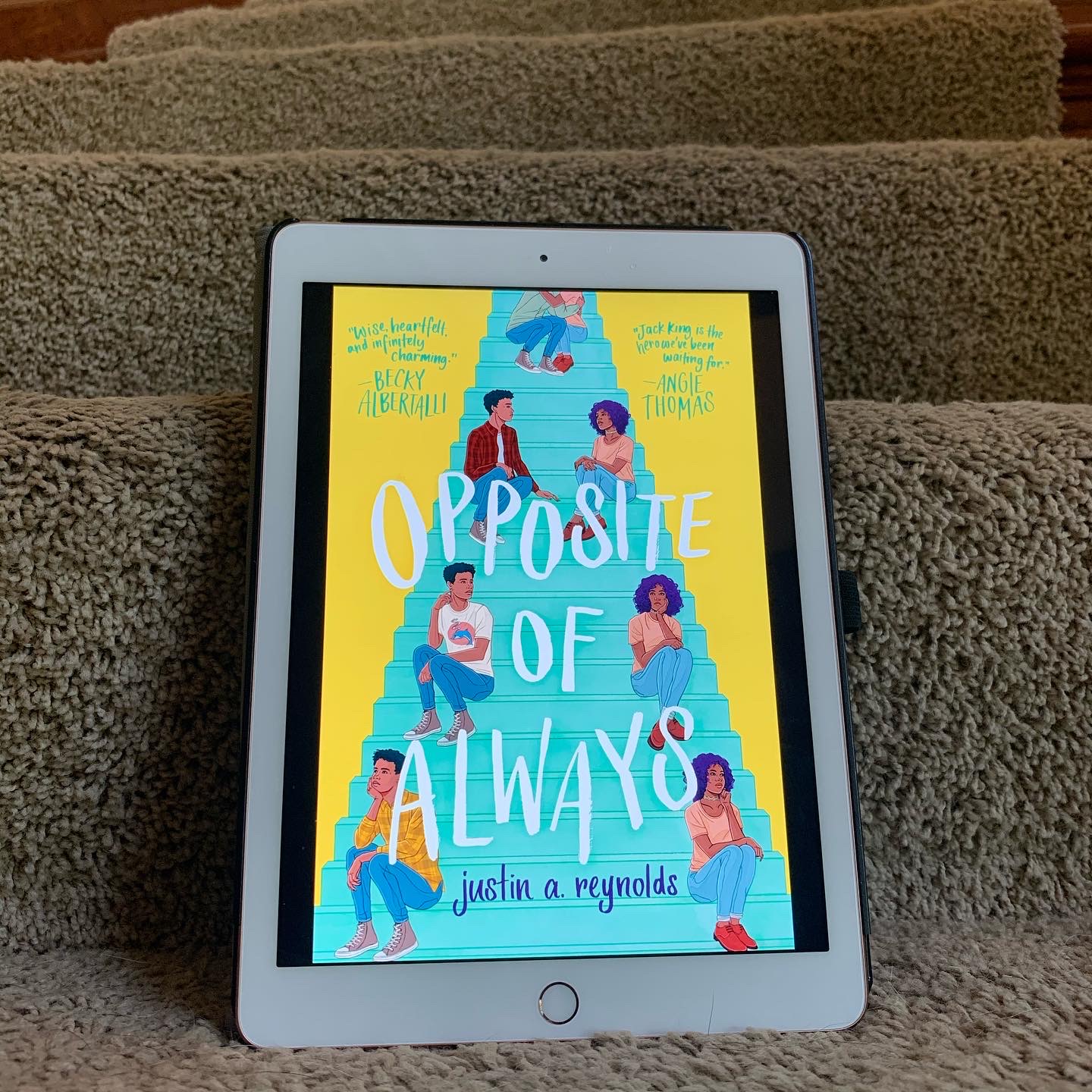 As soon as I finished OPPOSITE OF ALWAYS by Justin A. Reynolds, I knew it would be one of my favorite reads of the year (you can hold me to that in December). I mean, it’s a YA involving time travel, so that shouldn’t surprise anyone 😉.

But in case you aren’t familiar, OPPOSITE OF ALWAYS is the story of Jack and Kate, who meet at a party and instantly bond. Over the next four months, Jack falls for Kate, but she dies, and he’s zapped back to the moment he met her. He’s set on a Groundhog Day-type loop—only four months long!—trying to figure out how to save her. In addition, he’s navigating his relationships with his two best friends, Francisco (Franny) and Jillian, and messing things up with both them and his parents at different points.

First off, I love the question this premise poses: If you could do things over, how would you change your actions? But then, what ripple effects do your actions have on others? How many times does it take for you to get things right so that everything turns out the way it needs to? Justin A. Reynolds handles this all so brilliantly. I loved every single character. None of them were perfect—except maybe Jack’s parents. I do love it when characters have awesome parents. Jack makes a lot of mistakes and has a lot of growing to do. It just makes you think. 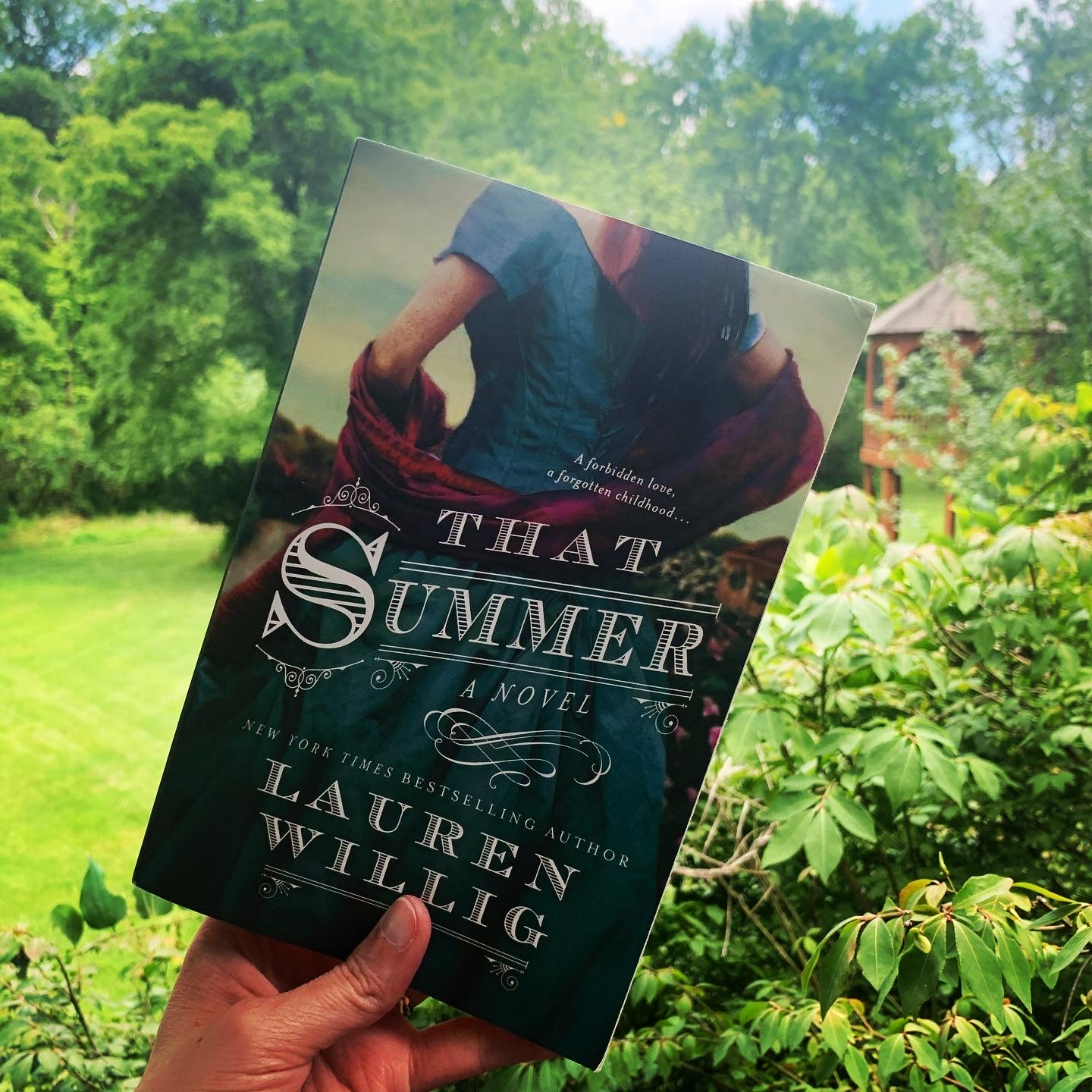 I posted last week that I love books with dual timelines, and I just finished a good one that happens to be—gasp!—an adult book. THAT SUMMER by Lauren Willig was actually my reward from the summer reading club through the St. Louis County Library last year, and I just now got to it because, well, adult books just aren’t my first choice anymore. But this one was fantastic.

The story alternates between 2009 and 1849. In 2009, Julia has just inherited a house outside London from a great-aunt she never knew. When she goes to start cleaning it out, she discovers a painting hidden in the false back of a wardrobe, and the story reverts to 1849 and Imogen, trapped in a loveless marriage but about to meet an intriguing painter.

The story skillfully switches between Julia trying to solve the mystery of the painting and following the actual story of Imogen. Quite often when I’m reading adult books these days they just seem so LONG, but this one flew by. The pacing between the two plots was fantastic, and both Julia and Imogen had compelling stories. I was rooting for both of them, hoping they’d get a happy ending. I won’t spoil it, though 😉. 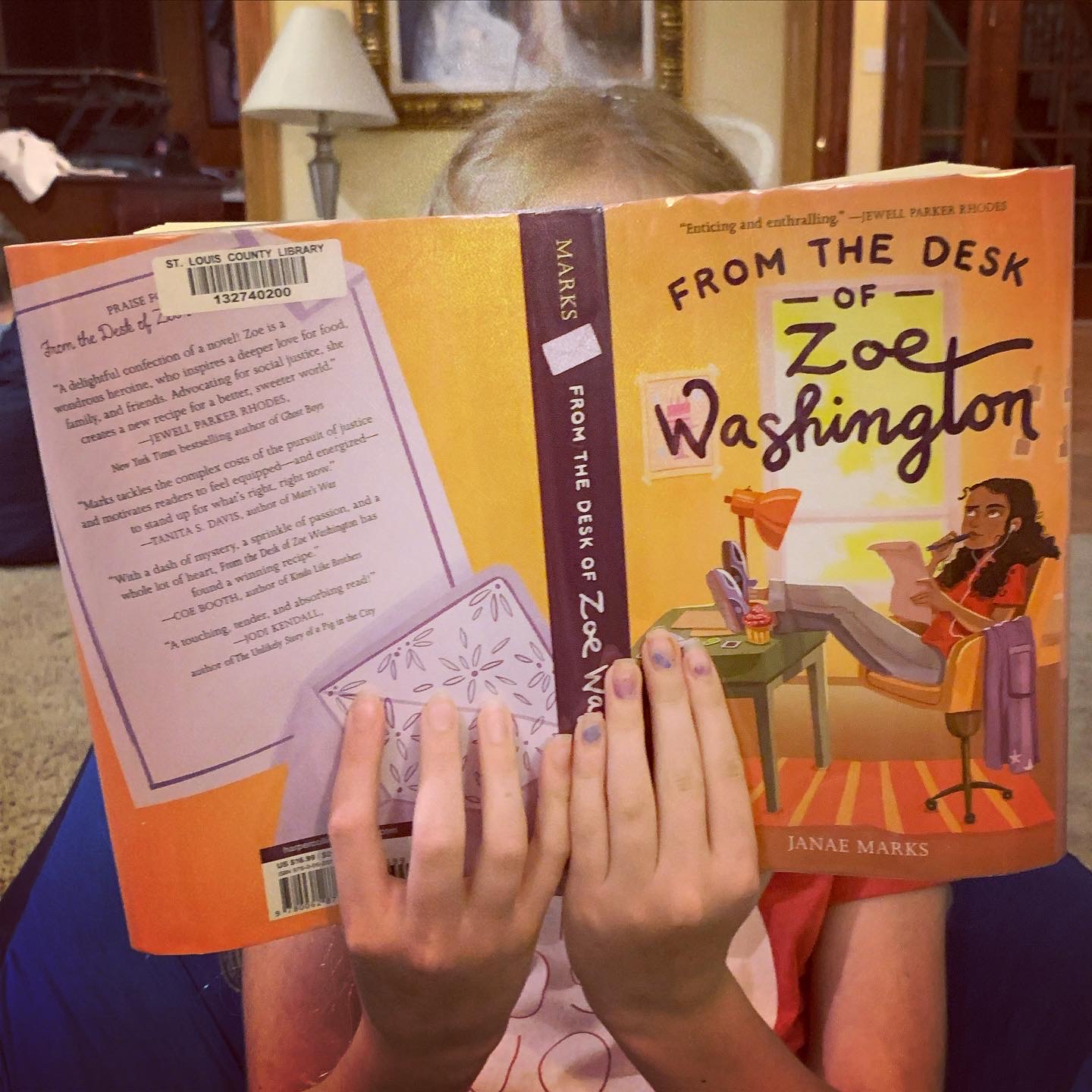 I don’t read as much middle grade these days (only 10 out of 109 books in 2019), so when I do it’s usually something that has really caught my attention. I’d seen several people talking about FROM THE DESK OF ZOE WASHINGTON by Janae Marks, then I read the description and was immediately intrigued. I also knew my daughter would love it; throughout the book she kept stopping to tell me what she thought would happen next. I do enjoy when we read a book together! On to the description…

On her 12th birthday, Zoe receives a letter from her father, Marcus, who’s in prison for a crime he says he didn’t commit. She decides to write back, determined to uncover the truth, even though she has to hide the investigation from her mom and stepdad. They think she’s worried about her bakery internship and proving she’s worthy of auditioning for Food Network’s Kids Bake Challenge. Will she discover Marcus is lying?

I loved the letters between Zoe and Marcus, and I really liked Marcus as a character. From the description, I expected it to be Marcus trying to convince Zoe of his innocence, but it really was more that he just stated it and accepted where he was, while she was driven to prove it. The supporting cast of characters was fantastic, especially Zoe’s grandma and estranged friend Trevor. Both relationships are so well-drawn, as are her parents. It’s a story about family and friendship and not giving up on the search for justice, even when it seems like it’s too late. I encourage everyone to read this and then to give it to a young reader.

Oh, I almost forgot to mention the baking—because that part is awesome too. 🧁 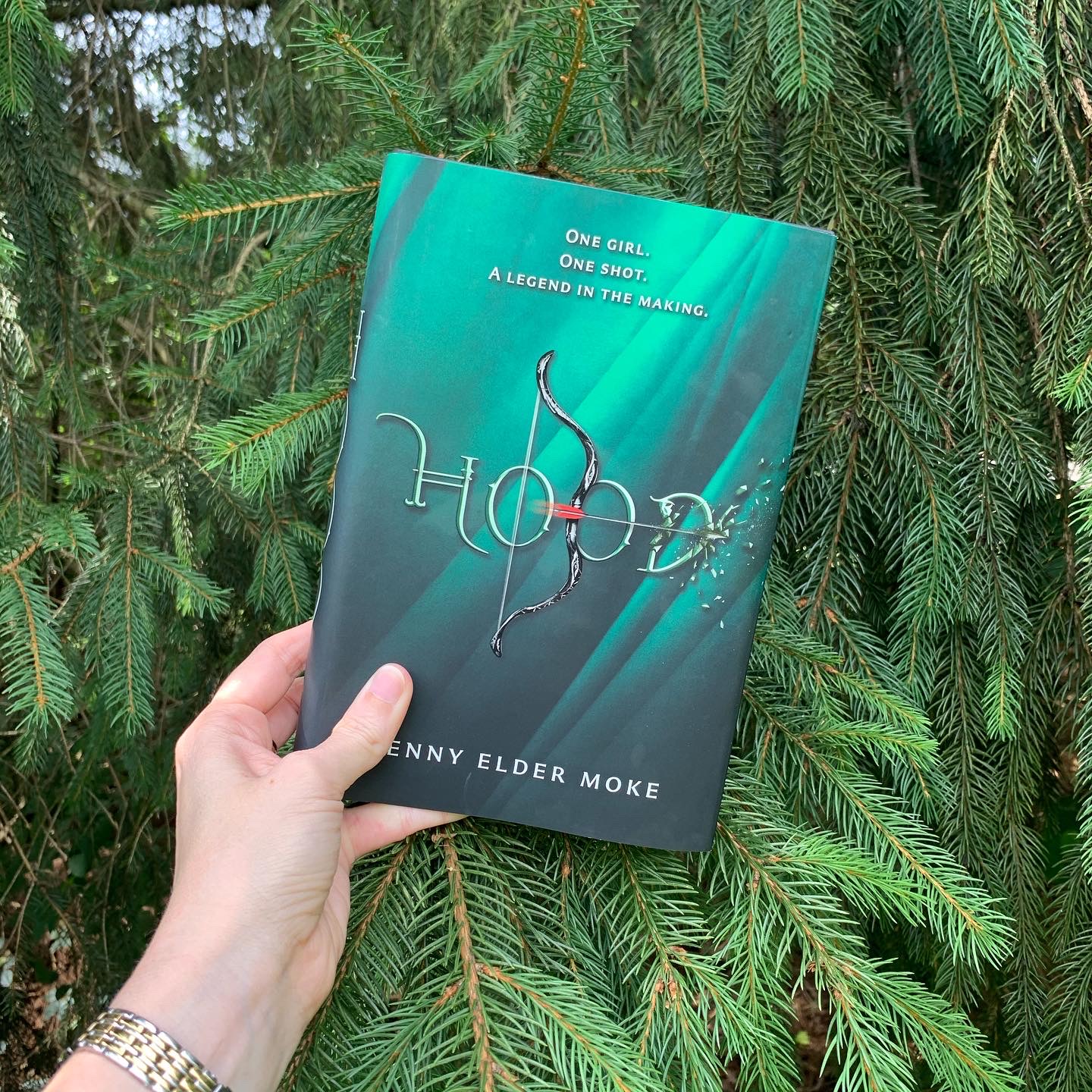 Do you have a favorite legendary character? I’ve always loved the tale of Robin Hood, starting with the Disney movie when I was a child. “Robin Hood: Prince of Thieves” is another favorite. Fun fact: I once sang “Everything I Do I Do It For You” at a wedding. Yes, I can totally claim the title of wedding singer 😉.

But back to the reason for this review, which is the recently released HOOD by Jenny Elder Moke. This latest Robin Hood retelling follows Isabelle of Kirklees, hidden inside a convent with her mother, Marien, since birth. At sixteen, Isabelle is arrested by royal soldiers for defending innocent villagers, and her mother helps her escape and sends her to find her father, Robin Hood.

The story is full of action, and I love how Isabelle is both a strong character but also experiences fear and makes missteps throughout the story. The surrounding cast of characters is also fantastic, focusing mainly on the younger members of the Merry Men but of course with appearances from those we’d expect from the traditional tale. I’m really hoping there will be more stories to come from the world of this re-imagining! 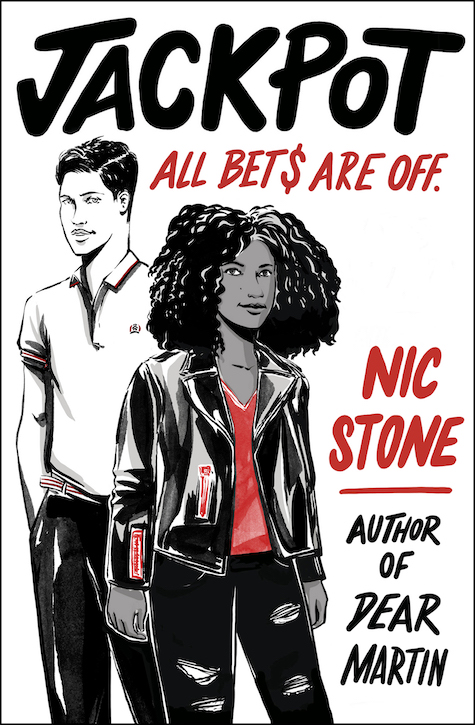 After reading DEAR MARTIN by Nic Stone, which is quite a serious book, I wanted to try one of her other books. I was interested in the central question of JACKPOT: What would you do if you won the lottery?

After Rico, the main character, sells the jackpot-winning ticket, she enlists the help of wildly popular and rich classmate Zan to help her track down the ticket holder, who hasn’t claimed the prize.

JACKPOT is a quest to find the ticket holder, and there are a lot of fun elements, but it also takes a hard look at class and money, as well as frank discussions about race. So the book still ended up being more serious than I expected, but in a good way. I loved Rico’s younger brother, Jax, and Rico’s growing friendships during the book. There was also a really unique element with interlude chapters from inanimate objects—totally makes sense when you read it :). I stayed up until midnight to finish JACKPOT because I had to find out how it ended! Not going to give it away.

So that’s what I’ve been reading lately. How about you? Anything interesting I should check out?

10 Story Elements That Always Hook Me