I normally do review roundups on Mondays, but today is special because it’s the book birthday for my friend Jamie Krakover’s YA debut, TRACKER220! I didn’t want to let the day pass without celebrating with her, and while I’m at it, I might as well tell you about a few other books I’ve been reading recently.

But first, some background. Jamie and I first met online–as people do 😉–but as we both live in St. Louis, finally decided to meet up for lunch one day after I tweeted about a months-long wait on a library hold for a book she had. We’ve been meeting up a couple times a year ever since.

I was privileged to read an early version of TRACKER220 and have been cheering on Jamie’s journey as she pursued publication. I’m so excited that it’s finally out in the world! 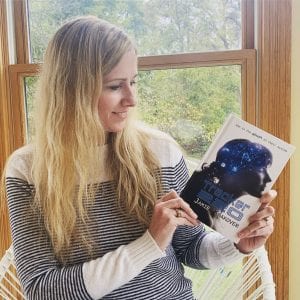 When everyone has a brain-interfacing tracking chip, one glitch threatens the entire network. Kaya Weiss is that glitch.

Through thoughts and blinks, Kaya can access anyone or anything on the tracker network. But the authorities monitor everything—where Kaya goes, who she talks to, and what she searches. And without the ability to turn it off, Kaya and her family can’t observe a tech-free Shabbat. To fix the glitch, the authorities slice into her skull to reset her tracker, leaving Kaya to question more than the system’s invasion into her faith.

Evading the authorities requires some serious tech skills the rogue underground Ghosts can offer. But Kaya’s not sure she can trust them—even if their top tech wiz, Bailen, has interest in her running deeper than her bum tracker. Kaya must decide if gaining freedom is worth losing her tracker’s infinite knowledge—because to take down the tracker network, she must betray the only tech she’s ever known. 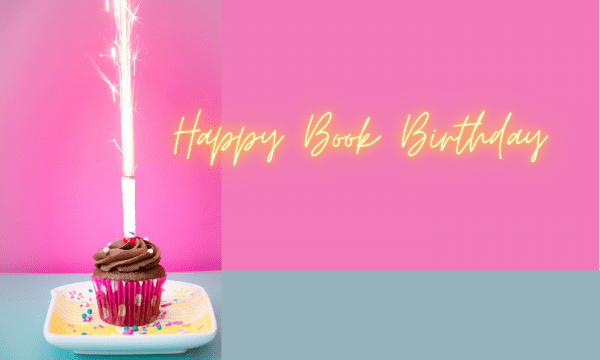 On to a few other books I’ve recently read. First up is AMERICAN ROYALS by Katharine McGee! 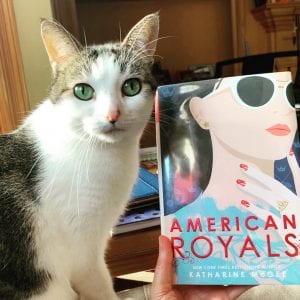 I love books with sweeping what-if questions like the one at the center of AMERICAN ROYALS:

What if George Washington were the first king of America instead of the first president of the United States?

I mean, this question completely changes the history of our country. And it’s also the kind of question I wish *I’d* thought of first. But of course, I’m sure I wouldn’t have executed it the same way—and this book is done SO WELL.

I could not put this book down. Everything about it was gripping—the characters, the romance, the tension. There are several different points of view, and I found the choices of who to follow quite interesting. We get to see inside the viewpoints of the future queen, her younger sister, royal best friend and potential girlfriend of the prince, and finally the ex-girlfriend of the prince. But we never get an inside look at any of the male characters, and I think that provides an additional source of tension. I found it quite fascinating.

I finished this book late at night, and I immediately loaded the sequel on my Kindle (because it was the fastest way to start reading it!). I have to admit I wasn’t totally satisfied with the ending of book two; however, I think it’s because the author is hoping to write a book three. I’m hoping for that too! 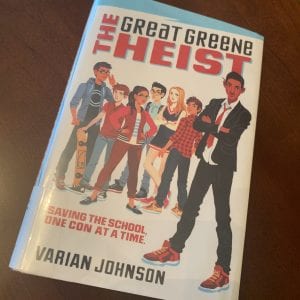 As I was getting everything ready for my new website, I went through all the other websites my designer had done for ideas and discovered Varian Johnson. I’d never read any of his books, but they sounded fantastic!

I started with THE GREAT GREENE HEIST. It’s about middle schooler Jackson Greene, famous for incidents like the Shakedown at Shimmering Hills, the Blitz at the Fitz, and the Mid-Day PDA (after which his best friend and maybe something more Gaby de la Cruz stopped talking to him). When Keith Sinclair—loser of the Blitz—announces he’s running for school president against Gaby, Jackson assembles a crack team to ensure the election is done right. Together they devise a plan to bring down Keith (who has shady connections to the principal) once and for all.

This book is billed as a middle grade Ocean’s 11, and it really lives up to that description. Jackson pulls together a group of kids with different areas of expertise to ensure Gaby wins the election. Except… it’s actually about more than that. It’s about outwitting Keith, whose underhanded tactics are revealed early on. And it also features a really smart and sweet middle grade romance story, complete with all of the confusion that goes along with those emotions at that age.

As soon as I finished the book, I passed it on to my seventh grade son, and he loved it too. I definitely intend to check out more Varian Johnson books! 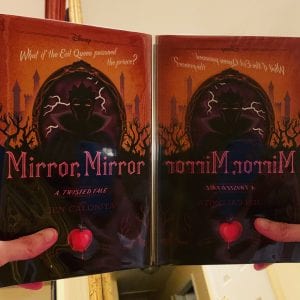 It’s no secret I love fairy tale retellings, but I actually ended up reading MIRROR, MIRROR by Jen Calonita because of my 10-year-old.

See, she read all of Jen Calonita’s Fairy Tale Reform School series and then CONCEAL, DON’T FEEL, part of Disney’s Twisted Fairy Tale series. But when we went to B&N to find more, the bookseller directed us to the YA section, and I realized I’d better read the books myself first.

I’m so glad I did! I really loved MIRROR, MIRROR (and incidentally, I also felt it was completely fine for my 10-year-old). The premise of the story is: What if the Evil Queen poisoned the prince instead of Snow White?

Snow White has never been one of my favorite fairy tales, but I loved the way Jen Calonita brought her story to life. Snow doesn’t start out very strong as a character, but her growth throughout the story makes her a true hero you’re rooting for. I also really enjoyed the supporting characters, even including the Evil Queen.

Now I guess I should read the other Twisted Fairy Tale my daughter already has 😀.

So there are a few recommendations for you. Happy reading!!

An Update on the Book I Attempted to Pants