In February, I started a series sharing how I’m using social media to promote my upcoming debut, YOUR LIFE HAS BEEN DELAYED. So far I’ve covered:

I joined Twitter back in November 2008 when I was still working full-time in public relations. This very original tweet said:

Unsurprisingly, it had no likes 🤣.

After that, I started using the account to promote my clients, so my early connections were mainly local reporters, most of whom have now moved on to different jobs. Once I left my full-time job in 2010 to focus on writing, I starting seeking out the writing community on Twitter. I met some of my longest-lasting critique partners on Twitter, and I also learned about contests and gained fantastic knowledge through information shared on the platform.

A lot of that amazing synergy still happens on Twitter today, but it’s also evolved quite a bit in the 13 years since I first started using it. Here are my 2021 tips for getting the most out of Twitter and using it to promote your book.

As with any social media platform, your profile is important! I know when I’m deciding whether to follow someone, it’s where I go to figure out who they are and what they’re about. The major pieces of your profile include:

Make strategic use of your pinned tweet. It’s the first tweet visitors to your profile see. What are you promoting there? Lately I’ve been switching mine out with my release countdown threads, but no matter what, make sure that tweet is representative of what you most want to promote right now. Unless you’re the type to just highlight something goofy, then just keep being you 😀.

I’ve actually been using Tweetdeck since back in my agency days, when it was still an independent app. Now it’s part of Twitter and runs on a browser. I love Tweetdeck, especially in today’s environment when it’s so easy to find yourself doom scrolling, because it allows me to set up columns so I don’t miss the tweets most relevant to me. I follow a lot of people, but like in real-life relationships, some of them are closer than others. I currently have columns for:

For engaging with other tweets, I basically only use Twitter on my desktop on Tweetdeck. It’s too easy to get lost in endless scrolling otherwise. I know there are other similar programs out there, like Hootsuite. This just happens to be the one I’ve used forever.

All of this being said, the point of narrowing down the list of who you follow into smaller categories is to engage with them! Like all social media platforms, Twitter is about interacting with people. I obviously don’t reply to everything, but I go through my columns and like/reply/retweet/quote retweet as appropriate. I would never expect my online community to engage/help promote me if I’m not doing the same for them.

When it comes to actually composing tweets for book promotion, however, I do still often use the main Twitter app, and the reason for that is Twitter threads. I’m a bit of a late adopter on these–probably because you can’t do threads in Tweetdeck and that’s where I was hanging out–but I’ve been using them more lately and seeing some great engagement. 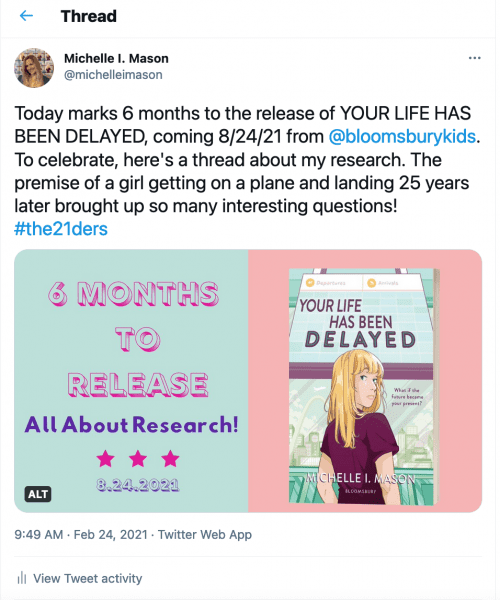 Basically, threads are a series of connected tweets. Using the Twitter app, either online or on your phone, you can compose the first one and click the plus button to keep adding more until you’re finished, then publish them all together like a story. I’ve used them for my last two release countdown features (click on image to the right to see thread).

Images aren’t required for a thread, but as I mentioned in my last post, they help catch attention as people are scrolling through endless feeds.

My debut group, #the21ders, hosts monthly Twitter chats, and I make a point of participating every month. Is it mainly our own group participating? Yes, but you never know who might pop into a chat. In March, someone responded to one of my tweets asking for a blog interview. Many middle grade authors in our group also participate in a weekly MG chat. These are great opportunities to connect with potential readers.

My best tip for participating in chats is to schedule answers in advance, whenever possible. Even when I’m available to participate when the chat is happening, I don’t want to be focused on making sure my answers are perfect; I want to be able to engage with the other authors participating. So I schedule them all beforehand–double and triple-checking my answers and the timing 😉. You can schedule through the main Twitter app, Tweetdeck or other programs like Hootsuite.

I’ve already mentioned my debut group, and they’re a vital part of my social media efforts, I’d say on Twitter more than any other platform, because retweeting is easier than sharing on Instagram. While I have my #the21ders column on Tweetdeck, not everyone remembers or has space on a particular tweet to include the hashtag. But we also have private Facebook and Slack groups where we have dedicated spaces to ask for boosts on tweets when we particularly want to promote something. While my group is for traditionally published debut MG/YA authors, I expect there are groups out there for all types of authors banding together.

I already mentioned it above, but when appropriate, add a graphic to your tweets. I often use Canva (explained in my previous post) to create Twitter graphics, which are wider than the square graphics used on Instagram. Emojis also add an extra element that helps the eye pause.

One note about graphics: it’s also helpful to take that extra moment to type in the alternate text for the visually impaired. It takes less than a minute!

I have not started using Fleets, so I have no advice on that. Sorry!

When I do use the Twitter app on my phone, what I like most about it is that it pops up the tweets with the most engagement for me to scroll through. Sometimes these are the hot-button tweets I want to avoid, but other times they’re just fun tweets that I decide to join in the conversation.

I think that’s it for now! What Twitter tips do you have?