Hey, it’s time for another marvelous middle grade roundup! I thought August would never get here, and now it’s really flying by! My book finally comes out next month (yay!), and I’m in the midst of revising my 2022 book (more on that soon!). But here are a few great books I enjoyed over the past couple of months.

EVERYWHERE BLUE by Joanne Rossmassler Fritz is just gorgeous, inside and out. It’s the story of a family in turmoil, as their oldest son, Strum, goes missing. At the center is twelve-year-old narrator Maddie, who doesn’t understand the tension between her college-age brother and parents, just that she loves them both. And now that her brother is missing and her parents are focused on finding him, she seems to have lost them all, plus her older sister, who’s acting out in different ways.

Maddie is such a dynamic character, focused on her love of the oboe and figuring out how to navigate friendships and school. I also really appreciated the secondary characters, especially Nico, a classmate of Maddie’s in the advance math class she takes at the high school but also her sister’s friend. The story also has a strong focus on the climate crisis, as Strum’s passion for nature preservation was a source of discord with their parents. It’s also a passion for Maddie’s best friend, and during the course of the book she begins to explore it more, gaining a better understanding of her brother in the process.

It’s a moving story of family, friendship, conservationism, and also music. As a musician, I loved all of the classical music references! Sure, some readers won’t get them. But my 11-year-old listens to classical music every night when she’s going to sleep, so there are plenty who will. 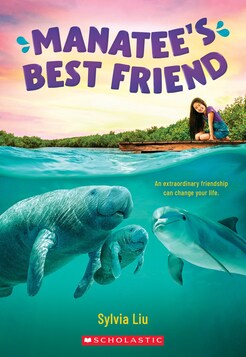 How adorable is this cover for MANATEE’S BEST FRIEND by Sylvia Liu? If you ever doubt the power of a great cover, let me just share that without knowing anything about the story, my 11-year-old saw this cover and said, “That looks good!”

The story inside is just as fantastic. Becca Wong Walker is incredibly shy, but she’s comfortable talking to the manatees that visit her dock. She also loves to record her observations and research about their habits and lives. When she gets paired with two outgoing classmates–one her new neighbor–for a science project, she has to learn how to speak up for herself and the manatees. Because her favorite animals are being threatened by boaters and a festival her own father is spearheading. There’s also an incredible story involving a dolphin that befriends the manatees.

I really loved learning about manatees and conservation through Becca’s story. I also appreciated how Becca grew in confidence and learned what it meant to be a friend. I highly recommend adding this book to your middle grade collection.

Set in India, this middle grade fantasy follows Rea, whose twin brother disappears early in the morning of their 12th birthday.

I’ve read a lot of books with twins where they’re best friends—and I love those!—but I really enjoyed that REA AND THE BLOOD OF THE NECTAR by Payal Doshi was about how they’d grown apart. But even so, Rea was determined to find out what had happened to Rohan and get him back, no matter the cost to herself. And that ends up being a lot, as the trail leads Rea into another realm where the queen is holding him captive.

The story is full of magic, a rich setting, and unique creatures, but what I loved most was Rea’s journey. From the beginning, she struggles with her place in her family, and she doesn’t have any idea how to be a friend or let people in. She grows exponentially during the course of the book. It’s so much more than a rescue mission.

This book is out now, and, even better news, it’s the first in a series, so there will be more!

If you could invite any three historical figures to dinner—real or fictional—who would they be? I always answer Jane Austen to that question, and then I’m not sure on the others. But I love that it’s the premise for Victor Piñeiro’s middle grade adventure—and I love how he executed it!

In TIME VILLAINS, Javi doesn’t know how to answer the question for his assignment, so his friend Wiki helps him come up with kid Mozart (because music) and the Earl of Sandwich (who invented sandwiches and Javi makes awesome sandwiches). For the third one, Wiki plays a trick on Javi, suggesting Edward Teach. Well, the trick ends up being on Wiki as well, when Javi’s table turns out to have magical abilities and actually brings all three guests to the table—including Teach, aka Blackbeard.

This story was such a blast to read. I loved the kids’ adventure—Javi’s sister Brady is also a kick—and I also loved how the table ends up being a character in itself. There’s a lot more going on in their town and their school, and I don’t want to spoil it. But suffice it to say, Blackbeard would rather stay and run amok in the 21st century, and it’s up to them to stop him.

All of these books are by 2021 debut authors, and they can use your support to build their reading base! If you check them out, let me know what you thought.

And if you’re inclined to check out my book, it releases Sept. 7! Pre-orders, library requests, and just generally shouting about it to the world are all welcome. You can can find everything you want to know about YOUR LIFE HAS BEEN DELAYED on this page. Thanks for your support!

1 Month to YLHBD Release: Places in the Book

My Author Copies Are Here! Plus new interviews