Before I get into today’s topic, I want to mention that my November newsletter is out today, and in particular, I have several events coming up over the next month. I have two signings at St. Louis Barnes & Noble stores, a virtual panel you can tune in to from anywhere, and will be participating in the St. Louis Teen Author Fest on Dec. 3. Please check out the newsletter for these events. The newsletter also includes a recipe for homemade Mocha Cookie Crumble Frappuccinno, Maggie’s favorite drink 😊.

But back to reading aloud…

If this topic seems familiar, you must have been following me for at least seven years, because the last time I posted about reading your manuscript aloud was in 2015. It’s definitely time for a refresher!

To give you a frame of reference, I just finished reading my work-in-progress aloud last week, so the benefits are very front and center. I’m currently working on a book I first wrote about ten years ago. I don’t know if it will end up being my next published book, but I hope so! While it’s the same premise I started with years ago, I completely overhauled the characters and most of the plot. As a read-aloud is a big time investment, I don’t do it with a first draft, because I know a lot’s going to change after that one. It’s more of a this-draft-is-going-places commitment. In this case, I’ve already run the manuscript through multiple readers, revised it, and am about to send it off to my agent!

It can be daunting to look at your manuscript and decide to read the whole thing out loud–especially when it’s 98,000 words. It took me about two and a half work days to get through the whole manuscript, but it was so worth it. I had a few goals for this read-through:

Mission accomplished! Definitely spotted a few more continuity issues I hadn’t yet caught, reading aloud made me slow down enough to really think about those issues I’d been addressing, and I cut about 900 words.

One of the main reasons I think it makes a difference to read aloud versus just reading it silently is that you hear the nuances not only of the word choices but the punctuation. Here are some specific examples from my recent experience. 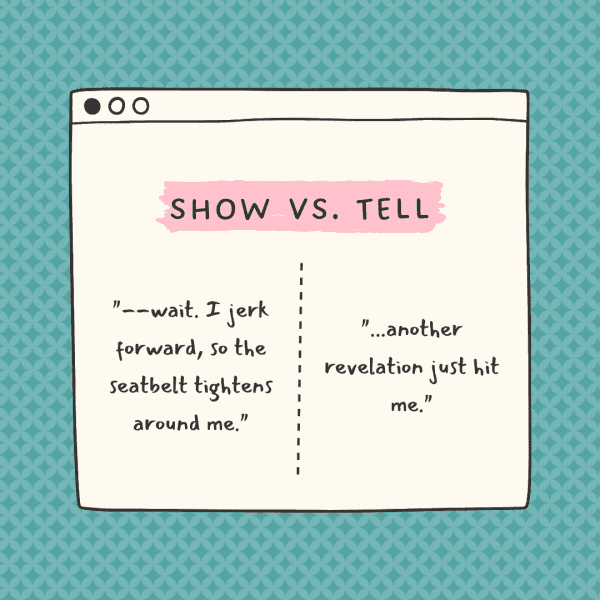 With my first two books, my editor pointed out these types of things a lot, so I notice them more myself now.Like: “–wait. I jerk forward, so the seatbelt tightens around me, but another revelation has just hit me.”See how I don’t need that last phrase? I’ve already shown that a revelation has hit her by the way she thinks “wait” and then jerks forward.Also, I can’t tell you how many times I deleted the phrase “I don’t know what to think” because my character had already gone through a whole spiraling series of thoughts that amounted to exactly that 🤪.

Sometimes when you read a word out loud, it’s immediately clear that word doesn’t work.Usually it’s a word I put in as a placeholder because I couldn’t quite figure out exactly what I wanted to use, but it becomes glaringly obvious it’s wrong when I start reading and am like, “Nope!” Then I have to figure out what does fit.

You know the drill from English class: it’s so much stronger to use the word you actually mean instead of “this” or “that.”

Words repeated too close together

You can do word searches to find how frequently you use words, and I’ve done that too, but when you’re reading aloud, it really stands out if they’re, say, two lines apart. No example here since I’m sure you know what I mean.

You’d likely catch continuity issues with a regular read-through, but I had just read the entire book as I was revising, and I still found several glaring remnants from my earlier draft as I was reading aloud. They just stood out even more as I started to say them and was then like, “Whoa, that doesn’t belong in this story anymore!”

Throughout the MS I caught a variety of issues with mixing up the voices of some of my characters in dialogue/texting, but the the biggest thing I noticed once I was reading aloud was toward the end. See, I have a young British character, and there’s a point where he goes into a sort of storytelling mode, which is fine, except he sounded like a stuffy middle-aged American professor instead of a 22-year-old Brit. As that was by far the section to which I made the most changes as a result of the read-through, let me just say, I put voice last here but it’s definitely not the least of what you’ll gain from a read-aloud!Fellow writers, do you read your manuscripts aloud? At what stage?

I’m also curious if it makes a difference what type of book you write. I posted about reading aloud on my socials last week, and it seemed like picture book and verse writers take reading aloud as a matter of course, but maybe not every other writer does.