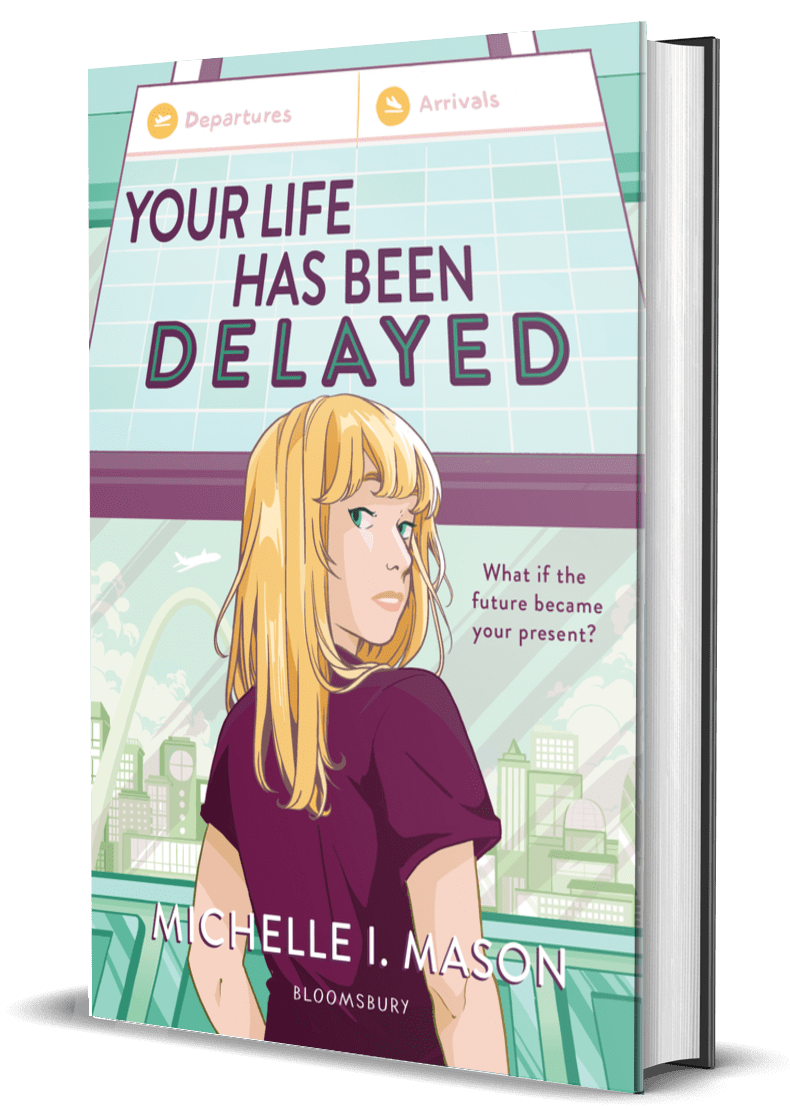 It’s Jan. 24, which means YOUR LIFE HAS BEEN DELAYED releases in just seven months! Also, in case you missed it, my cover was revealed last week. Actually, even if you didn’t miss it, I just really love looking at it, so I’m going to drop it here again anyway 😍.

At nine months out, I shared a playlist of songs to go along with the book, and last month I explained how I came up with the title (and also included some tips for titling manuscripts). Today I thought it would be fun to give you a watch list, with a few hints of things to keep an eye out for in the book. It’s a mix of TV shows, movies, and even a documentary series.

And we’re talking the original Beverly Hills, 90210, since Jenny is from the ’90s. I know there’s been a remake since then (although even that is more than a decade ago now), but to truly understand Jenny’s love for the show, you’d have to watch the original. My early drafts had so many more 90210 references than made it through to the final book. Like that line about how if a certain thing was true she’d be more upset than when Dylan and Brenda broke up…

Back to the Future

I mean, obviously. But I’ve included the poster for Part II here because it has a sort of interesting parallel. Marty and Doc jump from 1985 to 2015, and it’s sort of a trip to see how the writers envisioned technology for a time that is now six years in the past. One of the very first things Jenny notices about 2020 is that the movie got it wrong about flying cars. Yeah, I don’t think those are happening anytime soon…

I think it would be fun to do a group watch of this movie and tweet about it leading up to release. Let me know if you’re interested!

Jenny’s best friend–who is now an adult–introduces her to this movie because she knows Jenny is a Sandra Bullock fan. While it isn’t mentioned by name in my book, While You Were Sleeping came out in spring 1995, and Speed came out the year before. Interestingly, the movie The Net, which is all about a woman whose identity is stolen on the internet, came out July 28, 1995. Jenny happened to be visiting her grandparents in New York that week, but if she had seen that movie, it would have opened up a whole new view of the internet for her!

Also, fun tidbit about this movie: in the original version of the book, Jenny used Gracie Hart’s SING tactic to physically fight off conspiracy theorists. But even though the ending changed, this movie still was a good fit for the best friend scene.

Speaking of the internet, you should totally check out this 1995 episode of The Computer Chronicles, which starts with the line: “Who says online users are a bunch of antisocial geeks?” 🤣

It talks about “electronic mail” and people starting to post videos and photos on the internet. It explains what it means to subscribe to something. Starting a business website was revolutionary. “Successful homepages can be seen by 20 or 30,000 people a week,” they explain. Anyway, it’s fascinating to watch and gives both an idea of what the internet looked like then and how the vast majority of people just didn’t get it yet.

My agent, Elizabeth Bewley, actually recommended these two documentary series to me as I was revising, and after watching them, I ended up working them into my book as well. They give an excellent overview of the major events, pop culture, and trends of each decade. I hope they’re working on the 2010s now!

It’s truly fascinating to see how quickly the internet took off in the second half of the nineties and then expanded in even more directions (social media, anyone?) in the early part of this century. One of the main reasons I chose 1995 specifically was because of all of the major changes that happened in late 1995/early 1996. I plan to do a post on that another month.

Jenny is a huge reader, but young adult wasn’t really a big category in the ’90s. I mean, all I really remember is Christopher Pike and R.L. Stine’s Fear Street, but it’s also possible I just missed out because I’d already moved on to adult romance novels. In any case, this is a situation where Jenny is like teen me and loves her romance novels. But Dylan introduces her to young adult and The Hunger Games in particular, including the trend of popular young adult novels being made into movies.

It’s a bit embarrassing that even Jenny’s mom–who is now a grandma thanks to her little-brother-turned-way-old brother–has read these books before her.

When Jenny took off in 1995, she had a younger brother. She was 17 and he was 12, so that’s quite an age difference. And now it’s even bigger–in the opposite direction. But even with a huge age gap, there are still things that can bring siblings together–like the movies they grew up watching together.

For Jenny and Bradley–or Brad, as everyone seems to call him now–one of those movies was The Karate Kid. And it ends up playing a role in convincing Jenny he is who he says he is, so keep an eye out!

Also, if I’d known about Cobra Kai when I wrote this book, I totally would have had Jenny binge-watch it!

Interview with the Vampire

Behold, the hot vampires of the early ’90s: Tom Cruise and Brad Pitt. Oh, and Antonio Banderas! There’s just a brief mention in the book, but it seemed appropriate, since vampires are one of those things that come back every decade (and I, for one, am totally fine with that!). So just for the record, these are Jenny’s hot vampires.

So there you have it, the YOUR LIFE HAS BEEN DELAYED watch list. And when you read the book (in just seven months now!), you’ll have some behind-the-scenes information.

Until next month, when I’ll share… well, I’m actually still deciding between a couple options, actually. If you have specific requests of behind-the-scenes information you’d like to know, whether about the writing process or something in the book itself, drop me a note in the comments! There are still several months to go, so I’ll do my best to get to it.

DRAGONFLY GIRL and A Few Other YA Books You Should Read

Responses to “7 Months to Release: Your Life Has Been Delayed Watch List”