I’ve talked before about how much I love a good twist, and a book I read last week featured one that was so well done I wanted to give the author a slow clap. The few times I even entertained the thought that this twist might come, she cleverly misdirected me, the reader, so that when it finally happened I was stunned and yet thoroughly impressed. I wanted to page back through and re-read passages to figure out where I’d gone wrong. It made me muse about the power of a good twist and the different ways authors mislead us. For the purpose of this post, I’m going to talk about four kinds of twists, and I’m going to use examples. I’ve picked books that have been out for a while, but …

If you haven’t read CODE NAME VERITY by Elizabeth Wein, HALF UPON A TIME by James Riley, or THE FALSE PRINCE by Jennifer A. Nielsen and you intend to, stop reading now! There will be spoilers in this post. I’ll give you some pretty covers to prevent an accidental glimpse. 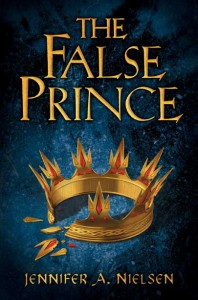 Still reading? Ok, then. Here are my thoughts on what makes a good twist.

The unreliable narrator – I’ve seen entire posts on the unreliable narrator, but I think the most masterful execution I’ve read is in CODE NAME VERITY. I knew there was a twist going into this book, and yet it still caught me by surprise because of the point of view Elizabeth Wein used. The first two-thirds of the book is written as Verity’s confession. Elizabeth Wein infused so much character into Verity’s writing, from her terror and disgust to comments about her captors, that I believed every word of it, even knowing there was some kind of twist coming. I had a number of theories about what that twist would be, but I never suspected that 90 percent of what she wrote was a lie and the rest a message to her countrymen. To think this girl had the presence of mind to make all of that up and still complete her mission … just wow. Well done, Ms. Wein.

The character who’s wrong – This is the kind of twist James Riley used in HALF UPON A TIME. At the very beginning of the book, Jack assumes that May’s grandmother is Snow White. He seems to recognize her, and May doesn’t know, so we believe him. I bought this false assumption all the way until he was rescuing her grandmother. That’s when it finally seemed off to me, and within pages we discover she’s actually the Wicked Queen. Once that was revealed, so many little things from earlier in the book suddenly made sense. Well done, Mr. Riley.

The character who holds back information – This one is especially hard to do well because it could easily turn a reader against the character if it seems like they were trying to trick the reader. There’s a delicate balance between the character just not thinking about the particular information the reader needs to fill in the puzzle and hiding it. Jennifer A. Nielsen did this masterfully in THE FALSE PRINCE. I’ll admit that although I was enjoying the book, there were aspects of it that bothered me–until the page where I understood that Sage actually was the missing prince. That’s when the stakes got real for me, and the novel as a whole went up several notches in my estimation. Because she nailed this twist. I didn’t feel tricked by Sage. Everything he’d said and thought fit perfectly with the reveal. The clues were there. I just didn’t see them for what they were. I think this might be my favorite kind of twist because it’s so hard to do. Well done, Ms. Nielsen.

The out-of-nowhere twist – I don’t have an example for this off the top of my head, but it’s the twist that just comes out of nowhere. It has nothing to do with what the characters think or say because they couldn’t possibly have seen it coming. It’s the author springing something on them. I have one of these in the novel I’m currently querying, and I also had one in the first book I seriously queried. I love it when someone says, “I totally didn’t see that coming!” Probably because I want to say that when I’m reading :).

Can you think of any other kinds of twists? Do you like twists, or do you feel tricked by them? Any other examples of books with good twists? Feel free to share titles but not what the actual twists are in the comments.

What I’ve Learned in Two Years of Querying

Responses to “The Power of a Well-Planned Twist”