I’m so thrilled to host Amy Trueblood here today. Sometimes you hear writers say that they’re just as happy when one of their friends gets a book deal as when they do. Well, I haven’t yet experienced the excitement of a book deal for myself, but I was over the moon when Flux acquired NOTHING BUT SKY. See, I was privileged to read an early draft of the manuscript (can I squee a bit because this is the first time my name appears in the acknowledgements??), so I’ve been cheering it on for a very long time. And now it’s a real, live book! Thank you to NetGalley for allowing me to read the finished version, which is so amazing I can’t even express how much I love it.

NOTHING BUT SKY comes out next week, and I’m giving away a copy to one lucky winner. But first, here’s the gorgeous cover and description, followed by Amy’s answers to five questions about what I love most. 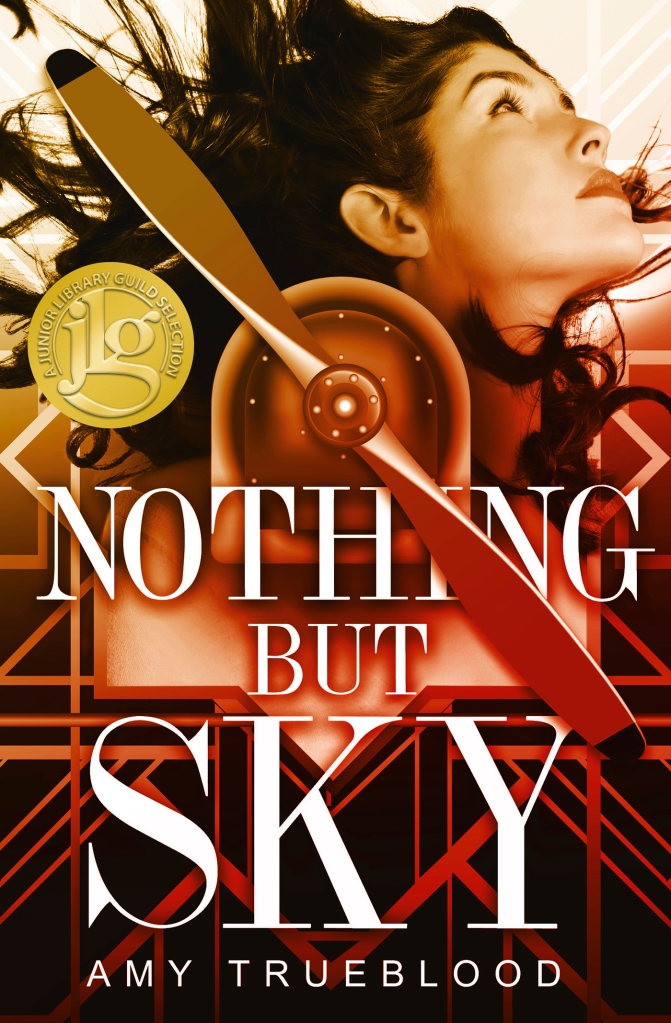 Eighteen-year-old Grace Lafferty only feels alive when she’s dangling 500 feet above the ground. As a post-World War I wing walker, Grace is determined to get to the World Aviation Expo, proving her team’s worth against flashier competitors and earning a coveted Hollywood contract.

No one’s ever questioned Grace’s ambition until Henry Patton, a mechanic with plenty of scars from the battlefield, joins her barnstorming team. With each new death-defying trick, Henry pushes Grace to consider her reasons for being a daredevil. Annoyed with Henry’s constant interference, and her growing attraction to him, Grace continues to test the powers of the sky.

After one of her risky maneuvers saves a pilot’s life, a Hollywood studio offers Grace a chance to perform at the Expo. She jumps at the opportunity to secure her future. But when a stunt goes wrong, Grace must decide whether Henry, and her life, are worth risking for one final trick.

And here are the questions for Amy.

1. Until I read NOTHING BUT SKY, I had no idea crowds flocked to watch wing walkers in the 1920s, but I loved learning about it. What inspired you to write about a young female wing walker?

In the summer of 2013, I visited the Museum of Science and Industry in Chicago. Tethered to the ceiling of the museum was a biplane with a mannequin hanging off the wing. I was instantly intrigued and went in for a closer look. A placard next to the plane detailed the life of a wing walker by the name of Ethel Dare. In that moment, I knew I needed to learn more about her. Later that evening, I started doing research and discovered that Ethel was one of a handful of brave women who soared through the skies and the idea for NOTHING BUT SKY was born.

2. Following up on the first question, from the first page, I read about Grace’s stunts with my mouth half hanging open. By the time I reached her last stunt, I couldn’t even believe someone would attempt such a thing. Are these real stunts wing walkers performed? How did you research them?

In almost all editorial stages of this book someone questioned me about the stunts Grace performs. All of them came from research I did via historical photos or actual footage I watched on YouTube. From the car-to-plane transfer to the “Showstopper,” these were real stunts these women performed, many times without a parachute to keep them from falling to their death.

Wow. I watched the videos of wing walker Lillian Boyer with my family. We couldn’t believe it.

3. The historical setting is so rich, with tidbits about popular music and film, fashion, the economy, and daily life sprinkled into the narrative. Did you have a particular strategy for balancing the history with the story, or did that come fairly naturally?

Thank goodness for edits. The first draft of this book lacked a lot of important elements of setting and historical detail. At first, I just wanted to get the story down. In the following edits and revisions, I would layer in slang, real-life historical figures, music, as well as clothing. Including all these elements wasn’t easy. Many days writing this book felt like slowly putting together a thousand-piece puzzle.

4. I love how the romance develops in the story, with both Grace and Henry growing together. Were they an easy couple to write, or did they give you trouble the way they give each other trouble in the story?

I wish I could say Grace and Henry’s relationship came easy but writing romance is HARD! I learned that there is a delicate balance between building character arcs and allowing your characters to slowly open up to each other. In the first few drafts, Grace was really tough on Henry. It took a lot of comments from CPs to make me realize she could still be vulnerable even if she was a strong, brave woman.

5. I love it when I find a title in the text of a novel: “My only wish was to be back on the wing with the wind in my face and nothing but sky for company.” Was the title an easy choice, or did you struggle with choosing the perfect title?

That line was in the original draft. The minute I wrote it I knew it was going to be the title. Thankfully, my editor and publisher both agreed it was a perfect fit for the book.

Now on to the giveaway. I’m giving away a copy to one lucky winner, North America only, please. You can enter by commenting below. Tell me what excites you about NOTHING BUT SKY :). And if you want the opportunity for extra entries, click on the Rafflecopter link below. Good luck! 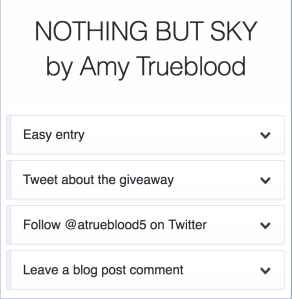 YA Review: STRANDS OF BRONZE AND GOLD by Jane Nickerson

Responses to “YA Interview & Giveaway: NOTHING BUT SKY by Amy Trueblood”