It’s March 24, which means we are now at 5 months to the release of YOUR LIFE HAS BEEN DELAYED. I can’t believe how fast time is flying by (pun totally intended ☺️).

I’ve been counting down the months leading up to release with behind-the-scenes information about the book. In case you missed any of the previous features, they included:

This month’s topic is:

I’m sure most people who know me in real life think this question has a very easy answer. I graduated from high school in 1996, which means that Jenny is the same age I was in 1995—and that I’m the same age she should be now 😉.

However, here’s a behind-the-scenes tidbit for you: when I originally came up with the concept, I intended for Jenny to jump forward 30 years, from 1990. It was only as I started to brainstorm and research the progression of technology that I switched to 25 years, and it was because I discovered something very interesting about the year 1995. Particularly in the second half of 1995, technology started to advance at an astonishing speed. This is a big reason why Jenny jumps forward on Aug. 2, 1995. I particularly wanted Jenny to be on the cusp of changing technology, where she would be aware of the internet but not understand how it is woven into everyday life in the twenty-first century. 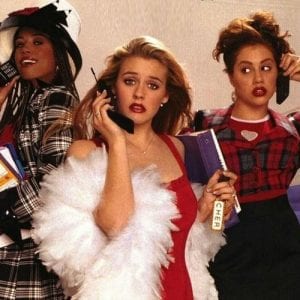 One of my all-time favorite movies, Clueless, released in summer 1995. The technology is completely unrealistic for teens in suburban St. Louis, where Your Life Has Been Delayed is set, but it’s a fascinating precursor for how cell phones were about to take over. Jenny doesn’t reference this movie, but she does mention that cell phones are for rich kids or spies, and here’s an interesting piece of information that makes that even more true. The flip phones used in the movie weren’t actually released to the public for purchase until January 1996, so any teens who had one must have had Cher-level connections! Also, product placement, anyone?

For further reading on the cutting-edge Motorola StarTAC: The first famous flip phone

A game-changer for personal computing, Windows 95 released Aug. 24, 1995. (Hey, that means it will have an anniversary on my release date!) I’ve always been a Mac girl, so I used Netscape, which released Navigator 2.0 in September. These operating systems made it astronomically easier to … er… navigate computers.

Now here’s an interesting fact. Three of the largest and most well-known sites–websites people use on a daily basis still today–all started in 1995. To me, that’s one of the greatest testaments to what was happening with the internet during that time. It was exploding in so many directions, with innovators coming up with new ideas every day. In case you haven’t guessed what they were yet…

Imagine if you could only access your email at home or work, from the computer it was linked to. That was life for everyone in the nineties, until free, web-based email allowed users to access their email online anywhere. Revolutionary! While Hotmail can’t be definitively credited as the first, it’s the leading contender–released in 1996.

Once I decided on the year, it was fun to research all of the other things besides technology that would make up Jenny’s world view. And, of course, those things were also my world view as a teenager. I had no idea at the time how quickly technology would change!

There are four more months left to count down, so if there’s a particular behind-the-scenes topic you’d like me to cover, please let me know!