Today marks six months until the release of My Second Impression of You!

Earlier this month, I asked my Instagram followers to vote on which behind-the-scenes information to share about the book first. They chose book inspiration, and I gave newsletter followers a sneak peek in my March issue. I’m going a bit more in-depth in this post today.

So, here’s the backstage pass–you’ll be hearing about those a lot with this book!–on what inspired My Second Impression of You.

One evening, I was sitting at the kitchen table with my kids, and the question came up: What if you could relive the best day of your life?

As I do with all story ideas, I jotted this one down in my Notes app. Here’s some of what my original note said:

What if you could go back and relive the best day of your life? But it turns out when you do, it’s not so great after all.

Maybe a girl just broke up with her boyfriend and she thinks the best day of her life was the day they met and she needs to recapture that day. If she could, maybe she could win him back. But when she goes back, she lives it from his perspective and finds out it wasn’t at all what she thought. Like he was interested in someone else or didn’t feel the same thing.

I filed away the basic idea, but I didn’t yet know who any of the characters would be or how to execute the story. At the time, I was working on another book that I really wanted to make happen but never quite could. However, I think it was good I wasn’t ready to write this immediately, because two things happened in 2019 that helped solidify this idea. 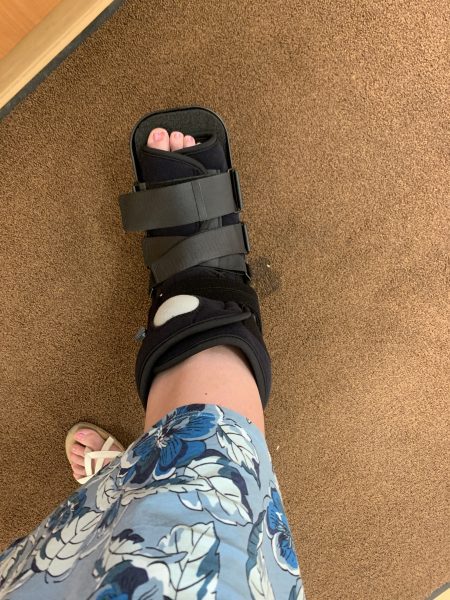 First, I broke my foot in July 2019. I couldn’t even tell you exactly how it happened. Basically I just didn’t see the steps and landed the perfectly wrong way to break my foot well enough to require surgery. Being the writer that I am, I badgered my surgeon with questions and took copious notes (you should see my daily log). As I told him, if I had to go through all of that, I was going to subject a character to it as well.

Second, in September 2019 my daughter auditioned and was cast in her first community theater production–Frozen Jr. She was part of the children’s ensemble, but the production included up to age eighteen. As I sat in the lobby during rehearsals, I heard teens talking about the classes they were taking and auditioning all over town for other productions. It opened up a whole new perspective of theater kids beyond just in school. It occurred to me that a teen girl who was that devoted to musical theater would be absolutely devastated if she broke her foot–especially if it happened in a way where she would have to miss a show and/or audition.

When I took another look at this best day idea, it was entirely clear how to torture my main character, Maggie, and how to execute it.

Once I started plotting the book, I decided that it wasn’t enough for Maggie to only learn that her boyfriend’s perspective of that day was different from her own, so she also gets different perspectives from other characters as well. The revelations from this day cause her to reassess several of her relationships.

Regarding the shows mentioned in the book, a few were definitely inspired by my own experiences. Frozen Jr. is the show Maggie was cast in on her best day, thanks to my daughter’s involvement in it. The play she misses at school is Shakespeare’s A Midsummer Night’s Dream. I was actually in this play in sixth grade as Titania, the fairy queen. However, that would never do for Maggie. She needed to be Helena, who has to physically chase after Demetrius. Pretty hard to do with a broken foot, pre or post-surgery. And then, of course, the production she wants to try out for is–wait for it–Footloose. Ironically, I went to see Footloose while I had a broken foot, and people made sooo many jokes. So, yes, I had to do that to Maggie too. There are more musicals mentioned, of course, so I will get to those when I do a backstage pass with either a watch list or playlist.

Once I had Maggie figured out, I moved on to the two boys, Theo and Carson. Theo is Maggie’s boyfriend at the beginning of the book, and Carson is his best friend. They are both serious golfers, and their choice of sport is entirely inspired by my husband, who was a high school and collegiate golfer. He still golfs recreationally, and I tried to learn so I could play along with him, but it ended with tears (on my part, obviously).

The last piece of inspiration I’ll share is the primary setting of Maggie’s best day. I’ve always loved going to county fairs–the rides, playing cheesy games for cheesy prizes, eating greasy but delicious food. So it was the perfect setting for where Maggie met Theo–and Carson, for that matter. Hopefully the book will have you ready to hit up the first carnival that comes to town this year!

I can’t wait to share more about My Second Impression of You with all of you. What else would you like to know? If you have a request for my next feature, leave it in the comments! If you need a refresher on what I covered for Your Life Has Been Delayed, it included a playlist, watch list, the title story, how I chose character names, book inspiration, places in the book, why she started in 1995, and deleted chapter titles. You can find links to them all on the YLHBD book page.

I’d love for you to pre-order, add the book to Goodreads, or request at your local library. As always, I appreciate your support 🥰.

YOUR LIFE HAS BEEN DELAYED Book Club Kit

THE LUCKY ONES and a Few Other Books You Should Read