My advance reading copies of My Second Impression of You have arrived! 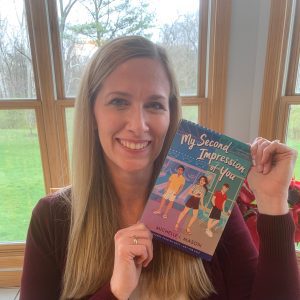 If you saw my ARC unboxing video for Your Life Has Been Delayed or author copy unboxing, you’ll know I like to have fun unveiling my books. But I admit I was a bit stymied deciding what to do for My Second Impression of You–until I considered that my main character, Maggie, is all about musical theater. So of course the unboxing had to be a musical. And it also had to be dramatic, so before you watch the video, here’s the full, dramatized story:

Last Monday, I received a text message from my agent saying that her advanced reading copies had arrived. How exciting! She included a photo of the copies already on her office shelf. As she’s in New York, I knew my copies wouldn’t arrive until at least Tuesday.

So the next day, I waited for the copies. By late afternoon, it became clear they wouldn’t arrive, thus my song hoping they would arrive “tomorrow.”

On Wednesday, I was sure they would come. That afternoon, a UPS truck stopped in front of my house. For several minutes, the UPS driver rummaged around moving boxes. “He must be searching for my box of ARCs,” I thought. And then… HE DROVE AWAY! I spent the rest of the evening sure UPS had lost my advance reading copies.

By Thursday, I doubted the ARCs were coming. I really thought UPS had lost them and I’d receive an email from my editor to the effect I’d have to wait for a new batch to be sent out. But then–another UPS truck arrived and set them on my doorstep. Hooray!!

Now that you have that backstory, here’s the video! Although I stopped singing once it was time to actually talk about the book. I was a little too excited to plan out that part, but maybe later 😊.

I hope you enjoy it! And bonus points if you can identify all the songs in the parody (not all of them are from Broadway).

Also, in case you’re new to the blog and haven’t seen my explanation of advance reading copies (or ARCs) before, these are printed copies of the unfinished book that are sent out to booksellers, reviewers, librarians, and other influencers several months before a book’s release. As noted on the copies themselves, they are not final and shouldn’t be quoted without comparing them to the eventual published books. To put it in perspective, the ARCs are the same version of the book that I just reviewed as pass pages (see this post for more on those). We didn’t make any really drastic changes, but there are a few things we caught that I’m glad won’t be in the final book.

The goal for ARCs is for these early readers to get the word out so bookstores, schools, and libraries will stock the book when it releases in September. If you’re one of those influencers, great! You can request ARCs from the Bloomsbury YA Publicity Department at ChildrensPublicityUSA@bloomsbury.com, or the book is also up on Edelweiss for request as well. Please do not ask me directly for an ARC, but do watch out for future giveaways!

I don’t think I can express how exciting it is to be holding this book in my hands. I want to once again thank cover artist Jacqueline Li and designers Jeanette Levy and Donna Mark, my agent Elizabeth Bewley, and my editors Allison Moore (who whipped this book into shape!) and Camille Kellogg (who’s guiding me through the final stages). This book wouldn’t be possible without you!

My Second Impression of You releases Sept. 20, 2022, from Bloomsbury YA and is available for pre-order now at all major retailers. I’m partial to my local independent bookstores, The Novel Neighbor and Main Street Books, but you can also select your own local indie through Bookshop. Other options include Indiebound, Barnes & Noble (love my local stores!), Amazon, and Book Depository (for international orders). For those who have asked, yes, I will be putting together a pre-order campaign, and it will include orders from any store this time (since I know a few already took advantage of that B&N sale earlier this year 😊), so keep those receipts! If you’re not ready to pre-order yet, you can also add it on Goodreads.

I hope you’re all just as excited to get your hands on the final copy of this book as I am!

THE LUCKY ONES and a Few Other Books You Should Read