I’m excited to be writing my first YA review of the year. I picked up SOMETHING STRANGE AND DEADLY mainly because I’d read so many helpful blog posts by Susan Dennard. I wanted to support her book since I’ve learned from what she shares online, so … good marketing strategy on her part!

But, even so, I only review a book if I really love it, and I did. Here’s the blurb from the jacket: 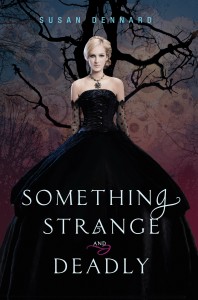 Eleanor Fitt has a lot to worry about. Her brother has gone missing, her family has fallen on hard times, and her mother is determined to marry her off to any rich young man who walks by. But this is nothing compared to what she’s just read in the newspaper–The Dead are rising in Philadelphia.

And then, in a frightening attack, a zombie delivers a letter to Eleanor … from her brother.

Whoever is controlling the Dead army has taken her brother as well. If Eleanor is going to find him, she’ll have to venture into the lab of the notorious Spirit-Hunters, who protect the city from supernatural forces. But as Eleanor spends more time with the Spirit-Hunters, including the maddeningly stubborn yet handsome Daniel, the situation becomes dire. And now, not only is her reputation on the line, but her very life may hang in the balance.

1. The premise – This is not your typical zombie book–they never even call the walking corpses zombies. What I like about it is that it takes an old superstition and accepts it as fact. People used to attach bells to a dead person’s wrist when they buried them so that if they woke, there’d be a warning. This book assumes they do occasionally wake up but then takes it further that someone is waking them on purpose. Here’s how the concept is introduced on page 1:

“I’d heard of corpses awakening–hungry and dangerous though still quite dead. The purpose of bells in coffins was, after all, to warn us; but if the word on the street was true, then in the last week more than a few bodies had escaped their graves.”

2. The setting – I felt completely drawn into 19th century Philadelphia. I loved the details, from the descriptions of how binding her clothes are to the hackney cabs and Exhibition. This single paragraph is a great example of how well the time is drawn.

“I leaned close to the carriage window and watched the mansions, elaborate fences, and well-tended yards roll past. Usually I navigated the hour-long trek into the city on foot or sat crammed on a horse-drawn streetcar. To ride without dust, mud, or horse manure flying into my face–no wonder Allison could wear such a brilliant blue dress!”

3. The romance – It’s always interesting to read a historical. While Eleanor’s age clearly puts her in the YA market, in her time she was already considered a woman and of marriageable age. Throw in the class structure, and you have a really interesting conflict to keep her from Daniel, who’s from a lower class and has a shady history. The romantic tension builds slowly, with her noticing the way he notices her and starting to notice him the same way and … well, you should just go read it and find out for yourself.

4. The stakes – They’re emotional, relational, physical. Susan Dennard doesn’t go easy on Eleanor from any of these standpoints. The consequences of the choices she and other characters make are the kind you can’t take back. As someone who’s often too nice to her characters, I winced quite a bit, but I see why things had to happen the way they did.

5. The ending – This is the perfect kind of ending for the first book in a series and follows the advice you always see when you’re pitching to an agent: the first book should stand alone. While I enjoy a good cliffhanger, I actually prefer a book that wraps up most of the plot in the first installment but still leaves me wanting more without making me hate the fact I have to wait for it. Because I enjoyed it so much, I’ll still want the next one as soon as it comes out, but not with the rabid curiosity about how the particular plot point left hanging gets resolved. It’s more that I want to know what’s going to happen next with the character than the plot.

Have you read SOMETHING STRANGE AND DEADLY? I’d love to hear your thoughts!

Does It Make Sense?

Responses to “YA Review: SOMETHING STRANGE AND DEADLY”