I should have known I would love this book. After all, KEEPER OF THE LOST CITIES made my top 5 middle grade reads of 2012, but I confess the description for LET THE SKY FALL sounded like something I’d heard before. I was so wrong, and I think that’s part of Shannon Messenger’s charm. She takes a premise you think you’ve read before and twists it into something completely new.

So, to start with, here’s the description: 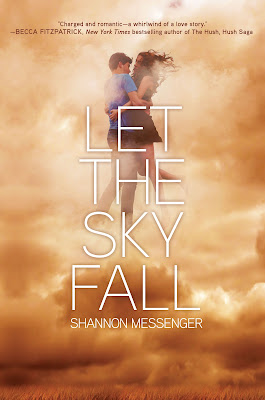 Vane Weston should have died in the category-five tornado that killed his parents. Instead, he woke up in a pile of rubble with no memories of his past–except one: a beautiful, dark-haired girl standing in the winds. She’s swept through his dreams ever since, and he clings to the hope that she’s real.

Audra is real, but she isn’t human. She’s a sylph, an air elemental who can walk on the wind, translate its alluring songs, even twist it into a weapon. She’s also a guardian–Vane’s guardian–and has sworn an oath to protect him at all costs.

When a hasty mistake reveals their location to the enemy who murdered both their families, Audra has just days to help Vane unlock his memories. And as the storm winds gather, Audra and Vane start to realize that the greatest danger might not be the warriors coming to destroy them, but the forbidden romance growing between them.

1. The wind – As I mentioned above, the premise seemed familiar, but as soon as I started reading it was clear it wasn’t. Shannon Messenger has a real knack for creating worlds, and this one delivers. I love the way Audra interacts with the wind, both physically and emotionally. I love the idea of the four winds and how the families connected to them identify on such an elemental level (couldn’t help that one).

2. Vane – How cool is his name? Get it? Weather vane? Anyway, I love his voice. He’s such a boy. Here’s a sample from his first real encounter with Audra.

“One crisis solved. Now I just have to deal with the passed-out, scantily clad girl on the floor of my room who’s most likely a supernatural creature.

No clue what to do about that one.”

Can’t you just see a guy reacting that way?

3. The fight scenes – Shannon Messenger doesn’t pull any punches with the fight scenes. She had me believing wind is the most powerful force on the planet. Audra and Vane get seriously beat up. She definitely didn’t go easy on her characters!

4. The alternating POVs – I posted a couple of weeks ago about the challenges of writing multiple POVs, and Shannon Messenger does it with ease. The voices are distinct. I understand what each of them wants most and what holds them back. And I care when they don’t get it. Well done.

5. The ending – It’s a perfect blend of wrapping up the current story and leaving me wanting more. I know Audra and Vane have more enemies to defeat and more to figure out in their relationship, but I don’t feel cheated out of a victory. I’m just excited for the next adventure to come.

Did anyone else snap this book up as soon as it came out? Tell me what you thought!

10 Tips for Titling a Manuscript

Responses to “YA Review: LET THE SKY FALL by Shannon Messenger”