Like many others, I decided to read The Mortal Instruments series by Cassandra Clare when the previews for the movie came out. Now, I know die-hard fans of the books have mixed feelings about the movie–I blogged about that here–but I’m glad I waited to read this series until almost all of the books were out because, man, can Ms. Clare write some major cliffhangers! As a result, I read the first three books, then waited to read the last three until the final book came out. However, I didn’t realize that her other series–The Infernal Devices–was connected until something very interesting happened in CITY OF HEAVENLY FIRE that was clearly a reference to something I should have known. It was done cleverly, in such a way as to be sort of spoilerly but not completely spoilerly, but even so, I went into the series 90 percent sure of the outcome, and I turned out to be right. I still loved it, but I’m putting it out there to warn you to read The Infernal Devices series before CITY OF HEAVENLY FIRE. Okay, on to the recommendation, starting with the description for the first book in the series. 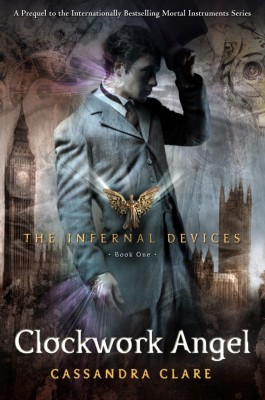 When sixteen-year-old Tessa Gray crosses the ocean to find her brother, her destination is England, the time is the reign of Queen Victoria, and something terrifying is waiting for her in London’s Downworld, where vampires, warlocks and other supernatural folk stalk the gaslit streets. Only the Shadowhunters, warriors dedicated to ridding the world of demons, keep order amidst the chaos.

Kidnapped by the mysterious Dark Sisters, members of a secret organization called The Pandemonium Club, Tessa soon learns that she herself is a Downworlder with a rare ability: the power to transform, at will, into another person. What’s more, the Magister, the shadowy figure who runs the Club, will stop at nothing to claim Tessa’s power for his own.

Friendless and hunted, Tessa takes refuge with the Shadowhunters of the London Institute, who swear to find her brother if she will use her power to help them. She soon finds herself fascinated by—and torn between—two best friends: James, whose fragile beauty hides a deadly secret, and blue-eyed Will, whose caustic wit and volatile moods keep everyone in his life at arm’s length . . . everyone, that is, but Tessa. As their search draws them deep into the heart of an arcane plot that threatens to destroy the Shadowhunters, Tessa realizes that she may need to choose between saving her brother and helping her new friends save the world. . . . and that love may be the most dangerous magic of all.

And here are the five things I loved most about this series:

1. The mix of genres – It’s steampunk and urban fantasy and historical all rolled into one. I guess steampunk is already historical, but you get my drift. While the demons and supernatural were still prevalent, this series was much more about invention and intrigue. I found it kind of amazing how it all worked together.

2. The literary references – I was an English major, so I loved the parallels the characters drew to A TALE OF TWO CITIES and the conversations about other literary works. I even enjoyed the poetry at the beginning of the chapters, and I’m not usually a poetry person.

3. The supporting characters – Ms. Clare’s books always have a large cast of characters. Sometimes I wish we wouldn’t jump to another character when I want to stay with a particular one, but she draws them all so well, even the minor characters. One of my favorites in this series shows up in the second book–Bridget, the cook, who sings the most inappropriate songs at the most appropriate times. Or is it the other way around?

4. The heartbreaking twists – Cassandra Clare has a unique flare for throwing a wrench in a story and then twisting and twisting. These books made me cry more than once, and that’s not usually something I’d say I love about a book, but for some reason I do with these. They earned my tears.

5. The romance – Part of what I loved about the romance in this particular series was how it fit into the courting rituals of the time. I do love my historical romance novels. And I have to say, this might be one of the most well written love triangles I’ve ever read. Back to point No. 4 …

As much as I loved these, I wouldn’t recommend them for younger YA readers. There is some older content.

Are you a Cassandra Clare fan? What’s your favorite twist? If you haven’t read her books yet, don’t read the comments, just in case someone spills!

WriteOnCon! With Advice If You’re Posting in the Forums

Responses to “YA Series Recommendation: The Infernal Devices by Cassandra Clare”