Anyone who was following me on Twitter last week was probably expecting this review. For that matter, if you’ve been following this blog for any length of time, it won’t surprise you either, considering I reviewed the first three books in The Lunar Chronicles series and CINDER, SCARLET and CRESS made it onto my favorite reads lists for 2012, 2013 and 2014, respectively. No doubt WINTER will be on my 2015 list. I was torn between wanting this book to never end and wanting to race to the end, but despite 823 action-packed pages, it still only took three days :). (I feel I should mention the fourth book, FAIREST, which chronicles the story of evil queen Levana. Yes, I enjoyed it and felt it added to the storyline, but in a I-so-want-out-of-her-head kind of way. Plus, it made me wait an extra eight months for this one :(.) Anyway, on to the description, which, if you haven’t read the other books in the series, will have spoilers. 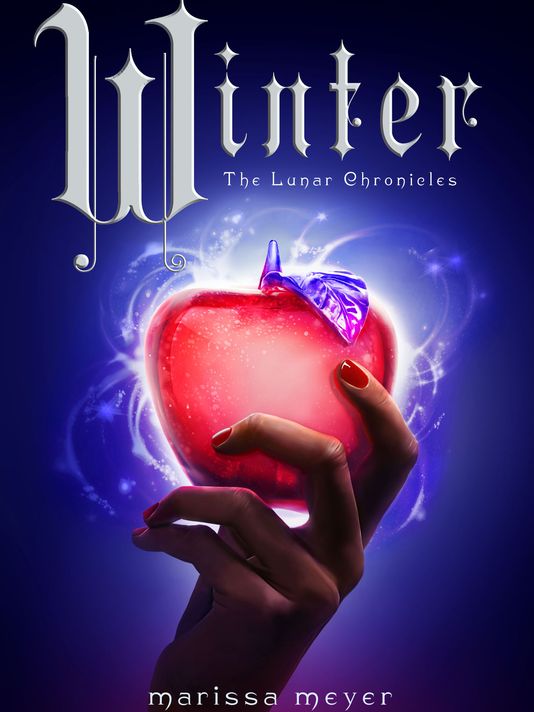 Princess Winter is admired by the Lunar people for her grace and kindness, and despite the scars that mar her face, her beauty is said to be even more breathtaking than that of her stepmother, Queen Levana.

Winter despises her stepmother, and knows Levana won’t approve of her feelings for her childhood friend, the handsome palace guard, Jacin. But Winter isn’t as weak as Levana believes her to be and she’s been undermining her stepmother’s wishes for years. Together with the cyborg mechanic, Cinder, and her allies, Winter might even have to power to launch a revolution and win a war that’s been raging for far too long.

Can Cinder, Scarlet, Cress, and Winter defeat Levana and find their happily ever afters?

Here are the five things I loved most, which I stress because I could wax poetic for a lot longer.

1. Winter – She’s not the traditional Snow White–but she is. Yet again, I am thoroughly impressed with how Marissa Meyer weaves in familiar elements while making this story completely her own. The people love Winter, and I loved Winter.

2. The interlocking stories – I mentioned this with CRESS, but it’s even more pronounced in WINTER with Levana, Winter and Jacin’s viewpoints added into the mix. Ms. Meyer expertly juggles nine (by my count) POVs throughout the novel without losing or confusing the reader. That is downright amazing.

3. The stakes – Oh my stars, as Ms. Meyer’s characters would say. The stakes kept getting higher with every chapter. New challenges for the characters at every turn. New scrapes to get out of–and sometimes changes that couldn’t be taken back. Wow. Just wow.

4. The romance – All of those romances that were set up in the first three books had to be resolved in this one, and I was satisfied with every one. Keeping in mind that these are supposed to be teenagers so they can’t all get married like in the original fairy tales. Thorne is still my favorite :).

5. The ending – I mentioned the length of the book at the beginning of this post, but there was so much happening in this book. Seriously, I was at page 200 thinking, what on Earth–or Luna–else can happen for another 600 pages? Ms. Meyer had so much in store, and every. single. page was earned. I loved every bit, and the ending was perfect.

Like I said, I had to limit myself to five here. Who else had to read this book as soon as it was available? Tell me what you thought!

Responses to “YA Review: WINTER by Marissa Meyer”