I haven’t been in the right state of mind to do a full review the past few weeks, but I have been reading some excellent books, so I decided to do a roundup. I usually try to do all young adult or middle grade at once, but I don’t feel like waiting until I have three or four of one or the other :).

First up is WRITTEN IN THE STARS by Aisha Saeed. For some reason, my Kindle didn’t pull up the description when I started reading, and it had been a while since I added it to my reading wish list, so I didn’t remember what it was about. When the suspense part of the story kicked in, it really took me by surprise, and then I couldn’t put this book down. The pacing is fantastic, and I felt so strongly for Naila. It’s a powerful read, and I encourage you to pick up this book now!

Naila’s conservative immigrant parents have always said the same thing: She may choose what to study, how to wear her hair, and what to be when she grows up—but they will choose her husband. Following their cultural tradition, they will plan an arranged marriage for her. And until then, dating—even friendship with a boy—is forbidden. When Naila breaks their rule by falling in love with Saif, her parents are livid. Convinced she has forgotten who she truly is, they travel to Pakistan to visit relatives and explore their roots. But Naila’s vacation turns into a nightmare when she learns that plans have changed—her parents have found her a husband and they want her to marry him, now! Despite her greatest efforts, Naila is aghast to find herself cut off from everything and everyone she once knew. Her only hope of escape is Saif . . . if he can find her before it’s too late.

The next two books are both by authors I heard speak at the NESCBWI Conference in 2016 and have had on my to-read list for quite a while. Padma Venkatraman gave a seminar on voice, and one of my critique partners specifically recommended I read her verse novel, A TIME TO DANCE. I picked it up at this year’s Scholastic Warehouse Sale, and I’m so glad I did! I tend to shy away from books I fear will be sad, but this book surprised me. Although Veda faces many challenges that could defeat her, she finds the strength to persevere.

Veda, a classical dance prodigy in India, lives and breathes dance—so when an accident leaves her a below-knee amputee, her dreams are shattered. For a girl who’s grown used to receiving applause for her dance prowess and flexibility, adjusting to a prosthetic leg is painful and humbling. But Veda refuses to let her disability rob her of her dreams, and she starts all over again, taking beginner classes with the youngest dancers. Then Veda meets Govinda, a young man who approaches dance as a spiritual pursuit. As their relationship deepens, Veda reconnects with the world around her, and begins to discover who she is and what dance truly means to her.

I attended a session with Jess Keating on killer openings, and man does she deliver in HOW TO OUTRUN A CROCODILE WHEN YOUR SHOES ARE UNTIED. I was laughing throughout the book, and even when I didn’t identify with the way Ana felt, her character was so well-drawn that I got it. Also, I loved the animal facts at the beginning of the chapters. There are two more books in this series, and I will definitely be picking them up.

Ana didn’t ask to be named after an anaconda. She didn’t ask for zoologist parents who look like safari guides. And she definitely didn’t ask for a twin brother whose life goal seems to be terrorizing her with his pet reptiles. Now, to make matters worse, her parents have decided to move the whole family INTO the zoo! All of which gives the Sneerers (the clan of carnivorous female predators in her class) more ammunition to make her life miserable-and squash any hope of class tennis stud, Zack, falling in love with her. Ana tries to channel her inner chameleon and fade into the background, but things are changing too quickly for her to keep up.

I’ve mentioned before how much I love the Sammy Keyes series by Wendelin Van Draanen, but it’s worth bringing up again. There are eighteen books in this series, so I’ve been stretching them out. I just read book four, SAMMY KEYES AND THE RUNAWAY ELF, and it added a new depth to Sammy’s character as she saw someone she’d previously resented in a new light. I don’t want to give anything away, but I really loved how Sammy grew in this installment. 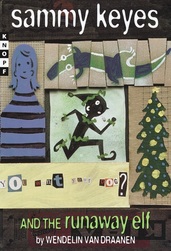 Chaos at the Christmas parade leaves Sammy Keyes on the hook for a wealthy woman’s dognapped Pomeranian, and a young girl mysteriously vanishes. The blackmailer and the dog owner are definitely naughty, and Heather is back with a vengeance and is certainly not nice. But it’s the missing girl and Sammy’s cranky neighbor who help Sammy put the pieces together.

So there’s a bit of what I’ve been reading. What about you? Anything to recommend?

MMGM: WILL IN SCARLET by Matthew Cody

What I’ve Learned in Six Years of Querying