A couple of weeks ago I had the most frustrating book-buying experience of my life. I might be exaggerating a bit in honor of this series’ main character … or maybe not. See, I bought GEEK GIRL by Holly Smale at the Scholastic Warehouse Sale. As soon as I finished, I wanted to keep reading, so I checked out books 1.5 and 2 from the library, followed by 2.5 and 3. Then I hit a snag. The library had the novella that went between books four and five but none of the rest of the books. When I put in the suggestion for them to purchase the books, a note came back saying the books were not available for them to buy.

What? I’ve had the library deny a request before, but never saying they couldn’t buy a book. And I had to read the rest of this series, so I went on Amazon. I could order book four relatively easily, but books five and six were only available to order from England. (Same on ebay.) Did I mention Holly Smale is a British author? Anyway, I had to pay a premium for these books and wait two weeks to get them. (I’m not a patient person.) And the real kicker was that when I checked on my order two weeks later, Amazon suddenly had the books available on Prime. Argh!

Anyway, the books were so worth the wait! And it was interesting to read the British versions, without any of the language Americanized :). I guess I should get on to the review. 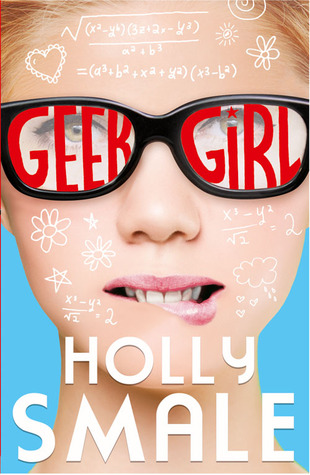 She knows that a cat has 32 muscles in each ear, a “jiffy” lasts 1/100th of a second, and the average person laughs 15 times per day. What she isn’t quite so sure about is why nobody at school seems to like her very much. So when she’s spotted by a top model agent, Harriet grabs the chance to reinvent herself. Even if it means stealing her Best Friend’s dream, incurring the wrath of her arch enemy Alexa, and repeatedly humiliating herself in front of the impossibly handsome supermodel Nick. Even if it means lying to the people she loves.

As Harriet veers from one couture disaster to the next with the help of her overly enthusiastic father and her uber-geeky stalker, Toby, she begins to realize that the world of fashion doesn’t seem to like her any more than the real world did.

And as her old life starts to fall apart, the question is: will Harriet be able to transform herself before she ruins everything?

Here are the five things I loved most about this series.

1. Harriet’s facts – Harriet is full of facts she throws at people randomly. With a few exceptions, people are either annoyed or baffled by her facts. I found them interesting or funny, and they were always relevant to the story. I thought Ms. Smale did an excellent job weaving in Harriet’s thought process so the reader understood how Harriet’s brain worked. For example, from book five:

So, here are some statistically unlikely events:

How do I put this?

They’re all more likely than Annabel allowing her eight-month-old daughter to start working as a fashion model.

2. The secondary characters – There are so many great characters to choose from–Harriet’s best friend, Nat; her stalker, Toby; her grandmother, Bunty; the models she meets on her travels. Every single character is uniquely and richly drawn.

2.5. The modeling – Yes, I slipped in a half-point. The books had novellas in between, so I’m adding in-between points. The inside look at the modeling industry was fascinating–the crazy shoots, the variety, and the fact that haute couture is nothing like what you see in a regular advertisement. It’s more like art.

3. The humor – It’s only appropriate to put humor after the point about modeling because many of Harriet’s modeling experiences result in situational humor. I found myself laughing out loud during every single book, even as I was shaking my head at Harriet, internally shouting at her to stop what she was doing immediately. Yep. They’re those kind of books–where you just can’t look away from the train wreck the character’s causing.

3.5. The settings – Through the course of six full-length books and three novellas, Harriet travels to Russia, France, Japan, Morocco, the United States, Australia–I’m missing some. And, of course, there’s plenty in and around London as well. Having traveled to a couple of the places she’s written, I felt like I’d traveled there all over again. And I want to visit the others. Fantastic!

4. The parents – I love Harriet’s parents. It’s explained early in the first book that Harriet’s mother died giving birth to her, and her dad remarried when she was young. Neither her dad nor her stepmom, Annabel, is perfect, but they are such a realistically drawn family. I loved watching them work through ups and downs through the course of the books.

4.5 Harriet’s growth – Some readers might find Harriet to be an unlikable character. She’s very high-maintence and has few friends as a result. She’s very inside her head and so literal that she constantly misses social cues, but that’s part of what makes her so interesting. During the course of the series, she has to recognize her shortcomings, and there are consequences for them. I liked how she grew up and adapted.

5. The romance – I left this for last because it was by far my favorite part of the whole series. I’m such a sucker for a good romance, and if an author manages to drag it out through this many books? Wow, that’s quite a feat. Let me just say that the fourth book, ALL THAT GLITTERS, broke my heart. I was seriously balling–which is very hard to make me do–and my kids came over and gave me hugs and then wanted to me to explain why. My nine-year-old son didn’t get it, but my seven-year-old daughter understood it was all about LOVE. (This is pretty much the way to make me cry–through relationship drama.) Anyway, I was very satisfied with the way the romance wrapped up. I was smiling at the end :).

Hopefully I’ve convinced you all to read this series, and I also hope you’ll be able to get your hands on all the books much more easily than I did!

YA Review & Giveaway: FOLLOW ME BACK by A.V. Geiger

Responses to “YA Series Recommendation: Geek Girl by Holly Smale”