I first read something about FAMILY GAME NIGHT AND OTHER CATASTROPHES by Mary E. Lambert a couple of years ago, but it took me a while to get to it. The title initially caught my attention because I thought it would be about a family playing games together. While I do totally understand the title after reading the book, I’ll just clue you in that family game night’s a very small part of the book, so don’t expect rousing rounds of Monopoly and Catan (or whatever games your family plays). As for the catastrophes … those are what kept me turning pages. Here’s the description. 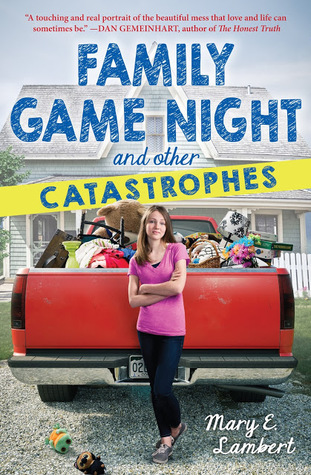 Annabelle has a secret . . . a secret so big she won’t allow friends within five miles of her home. Her mom collects things. Their house is overflowing with stuff. It gives Annabelle’s sister nightmares, her brother spends as much time as he can at friends’ houses, and her dad buries himself in his work.

So when a stack of newspapers falls on Annabelle’s sister, it sparks a catastrophic fight between their parents–one that might tear them all apart–and Annabelle starts to think that things at home finally need to change.

Is it possible for her to clean up the family’s mess? Or are they really, truly broken?

1. The premise – I can’t say I’ve read any other books about hoarding. Seeing how the various members of Annabelle’s family dealt with her mom’s hoarding–from avoidance to excessive cheer to obsessive cleanliness–felt very real and at times heartbreaking. Throughout the story, I was very invested in the characters and how they interacted with Annabelle’s mom and each other as they tried to figure out how to make changes.

2. The friendships – At the beginning of the story, Annabelle is so afraid of how her friends will react to her house that she shuts them out. As the book progresses, she gradually lets her friends into her world, and her friendships change with her openness. It was a great picture of how friendship is built on the ability to trust and accept each other.

3. Annabelle’s family – Annabelle has issues with pretty much every member of her family, but she doesn’t know how to talk to them or express her feelings. Part of her character development in the story is learning not only how to let her friends in but to reach out to her parents and siblings as well. Yes, the house needs to be cleaned up, but so does the family. I really liked how there was a bigger picture there.

4. Annabelle’s acceptance of herself – Annabelle’s very focused on the fact that she is fine just the way she is and it’s everyone else who is broken. It’s not unusual for people to feel this way, and yet I appreciates that there was a theme in the book of accepting your faults and learning to deal with them.

5. The crush – Alongside the heavier topics was a really sweet first crush. I liked how it was a nice side story and didn’t add to the drama going on in Annabelle’s life.

I really enjoyed FAMILY GAME NIGHT AND OTHER CATASTROPHES. Have you read it? What did you think?

Responses to “MMGM: FAMILY GAME NIGHT AND OTHER CATASTROPHES by Mary E. Lambert”