I’ve been writing novels for many years now, and over time, I’ve discovered what works well for me. At the same time, I also know that as a person who really likes systems and schedules, sometimes I need to be flexible and try new things. My usual system for drafting is to create an outline in Scrivener based on K.M. Weiland’s Structuring Your Novel. So my Scrivener file is full of digital note cards that look something like this: 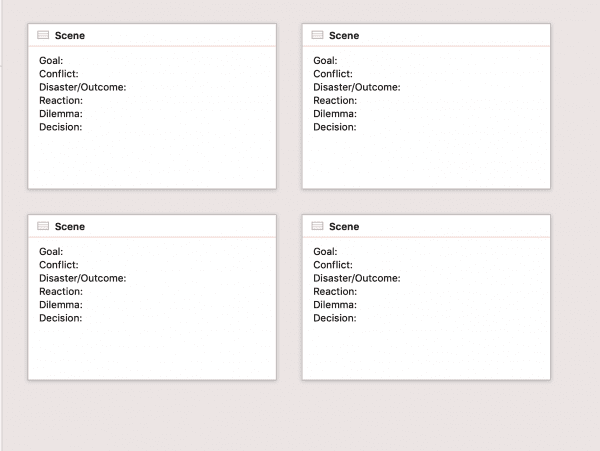 However, last summer when it was time for me to start drafting something new, I found myself at something of a loss. Instead of the plot being clear, I had a better idea of the character. I discussed it with my agent, and she suggested I just try writing and seeing where it went. For the unfamiliar, this is generally called “pantsing.”

I hadn’t done that in years–not since my very first book, which took me FOREVER to write, because without an outline I felt compelled to go back and edit everything. That wasn’t an issue with this particular book, but I did stall out around 30,000 words, an issue I blogged about last summer (When a Plotter Attempts to Pants).

As I wasn’t sure the book was even working, I sent it to trusted readers and revised based on their comments. I wrote a synopsis and sent it off to my agent. We went back and forth on two more revisions of this first 30,000 words, and while the manuscript had a lot of really nice elements to it, there was still a major piece missing: TENSION.

I just couldn’t figure out how to add the right amount of tension into the beginning of this manuscript. There’s a key reveal scene I had planned for about the fifty percent mark of the story, and my agent suggested I write that scene and see if it helped me figure out the earlier chapters, but the problem was: I couldn’t get myself to that part of the story. For some reason, I was just blocked on it.

So I set it aside and wrote a whole other book.

But, whenever I had time, I went back and worked on outlining this book, including that first 30,000 words. Now every scene has a goal, conflict, disaster/outcome, reaction, dilemma, and decision–because that’s how I ensure there’s tension. I finally finished outlining the week before last, so I’m back to drafting again, and today, I wrote THE SCENE–the one my agent wanted me to get to. It took me more than a year to reach it, but she was right that it helps to see that scene play out.

I don’t know what will end up happening with this book, but I’m going to see it through. And I will have learned valuable lessons from the process. It is ALWAYS worth trying new things when writing. I, for one, never want to be stuck in a rut.

TRACKER220 and A Few Other Books You Should Read