Today marks 4 months until the release of My Second Impression of You. I swear the last countdown was just yesterday. I mean, April is one of those short months, or maybe it’s that May has just been so full of activities the 20th has arrived very quickly.

Anyway, we’re now on the third backstage pass for the book. So far I’ve delved into the inspiration behind the book and shared a playlist.

So many book edits are about making cuts, but as I was going through developmental edits for MSIOY, I ended up adding a new thread: Broadway wisdom.

Here’s how it came about. The original draft of MSIOY opened with Maggie rushing out of Starbucks right after Theo dumped her. My editor suggested I back up the scene to actually show the breakup, but at another point in her notes she had also asked me to show where Maggie’s love for the theater originated and how it bleeds into all aspects of her life. Particularly for this scene, I thought: What if Maggie quoted a famous theater diva? It sent me down a long research rabbit hole. I found so many fantastic quotes from Broadway greats I ended up sprinkling them throughout the story as the wisdom Maggie draws on.

What made this even more perfect is that I’d already built into the story that Maggie’s grandma gives her a tear-off calendar every year. Easy enough to write in that a previous year’s calendar happened to be quotes from famous Broadway stars that she’s memorized as life advice. As she would!

I previewed a few of these quotes in my May newsletter, as shown below, and there are many more in the book, including a totally non-theater-related quote from Kristin Chenoweth in the first chapter. But also read on for some of the fabulous quotes I didn’t find a place for in the book. 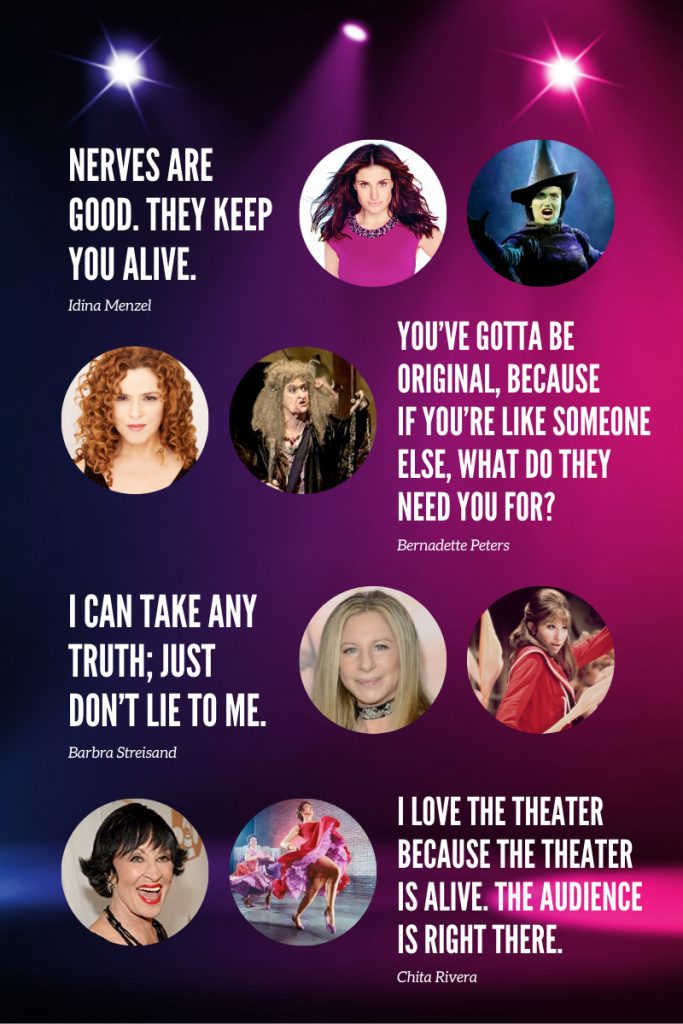 And here’s some other Broadway wisdom you won’t find in My Second Impression of You, but it’s just too great not to share.

“I wouldn’t trust any man as far as you can throw a piano.”
— Ethel Merman

“Bringing humor and bringing happiness and joy to an audience is a wonderful opportunity in life, believe me.”
— Angela Lansbury

“The regrets of yesterday and the fear of tomorrow can kill you.”
— Liza Minnelli

“A lot of Americans like happy endings, but life does not necessarily have a happy ending.”
— Chita Rivera

“Perseverance is failing 19 times and succeeding the 20th.”
— Julie Andrews

“I wish I could be like [George Bernard] Shaw, who once read a bad review of one of his plays, called the critic, and said: ‘I have your review in front of me and soon it will be behind me.’”
— Barbara Streisand

“I’m constantly learning, and that is the greatest gift of life in my opinion – to always be learning and growing.”
— Kristin Chenoweth

I hope you enjoyed this month’s backstage look at My Second Impression of You! I already have next month’s topic picked out, although it is dependent on some other factors coming together, so I hope I’ll be able to make it happen. If not, I’ll save it.

As always, I’ll remind you that the book is available for pre-order. You can select your favorite retailer on the My Second Impression of You book page. I will be doing a pre-order campaign again, and this time it won’t be linked only to a single store, so keep your receipt 😊. And if you’re on Goodreads, you can also add it there. I can’t wait for you all to read this book!

On Revising and Killing Those Darlings