Today marks 3 months until the release of My Second Impression of You. 3 months!

Every month leading up to publication, I’ve been giving a backstage pass into the book. So far I’ve covered the inspiration for the story, a playlist, and Broadway wisdom. Last week I shared an interview with Jacqueline Li, the cover artist for My Second Impression of You, and today’s backstage pass is an in-depth look at the MSIOY cover.

If you subscribe to my newsletter, you already got a sneak peek at this cover story, but I promise you this post will include additional, never-before-seen sketches as well as some more info I didn’t have room to include in the newsletter. My caveat, as always, is that this only represents my experience with my publishing house (Bloomsbury). I’ve formatted this like a conversation, showing my thoughts and Jacqueline’s, but of course there were many others involved in the process, and you’ll see them mentioned as well.

For me, the first step in the process was my editor asking if I had any concepts already in mind. At the time, the book still had my working title–Best Day of My Life–so a few of my ideas centered around somehow graphically showing that it was anything but the best day of her life. This particular idea didn’t gain ground because one of the early marketing decisions was to change the title. Possibly I’ll do a separate post on that 😉.

My other ideas were like: Make it look like a Playbill! Put the title on a marquis! I’m not a designer, folks 😊.

In addition to concepts, I also forwarded character descriptions and samples of covers I liked.

Next, my editor sent samples of potential illustrators from the design team. There were several great options, but Jacqueline had created one of my favorite covers from my debut group (Hot British Boyfriend), so that pushed her to the top of my list. Fortunately, she was also available!

When approaching book covers, my initial concepts are always guided by the text, since the story’s settings and themes determine what ideas will represent it well visually. In this case, I thought about motifs like the carnival, where Maggie initially meets Theo and Carson, the stage—a nod to her love of performing—and the magical phone app, and so on. After reading the manuscript, I’ll spend some time doing image research—looking for references of the things I’ll need to draw, or actors that might resemble the characters. Once I’ve sufficiently “absorbed” enough information, I’ll convert it into sketches. This stage is really just about exploring different ideas, and trying out as many as possible to see what works.

Roughs are generally quite loose, since there’s no need for a pretty, finished drawing yet—all that the sketch needs to do is indicate everything that will be on the cover and where those things will go. After coming up with a few solutions that work, I’ll shortlist the strongest 3 or 4 options to send back to the team.

Because a book cover will always have text, when beginning sketches, I try to come up with a text treatment first. Besides helping to establish a sense of what the whole cover will look like, it’s easier to know where the text will go and make the drawing work around it, rather than the other way around! Sometimes, a designer will set the typography—the visual appearance of the title, author’s name, and any other text that might go on a cover. Other times, I’ll do the lettering and draw the title by hand, which we did for this book.

As for illustrating characters, my approach is to think about them like real people! When visualizing Maggie, Carson, and Theo, I thought about where they might shop, what kind of clothes they’d choose, how they’d style their hair, how they’d naturally stand… Since the artwork has to be self-explanatory, every visual detail can be an opportunity to help tell the story.

Here are the two sketches my editor forwarded to me. The designer, Jeanette Levy, had already included some comments from their standpoint, and then asked for my feedback. I loved both of these initial sketches so much it was hard to even decide which direction to choose. As you’ll see, it ended up being a sort of combination of the two. 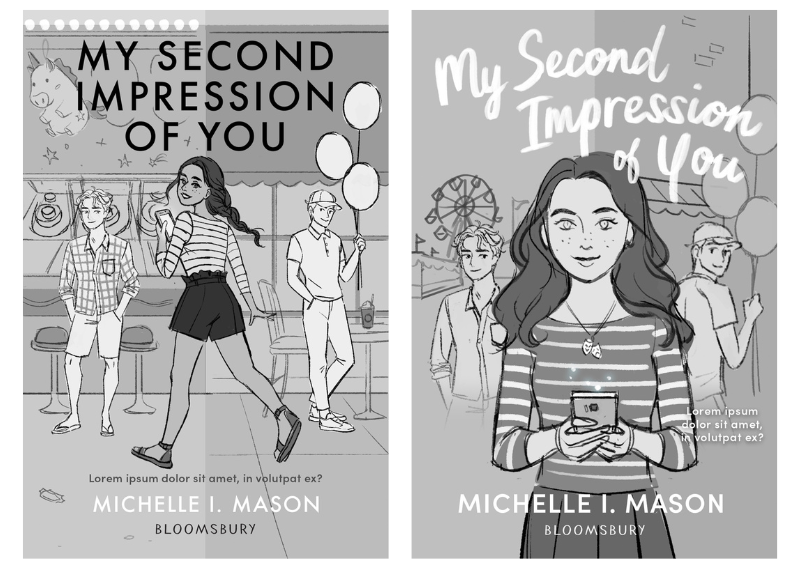 BUT, in addition to these two sketches that gave me heart eyes, Jacqueline also graciously shared with me two more of her initial sketches. I love that one of these also includes Maggie’s brother, Adam (the soccer player), and her best friend, Rayna. And the other one features Maggie in the spotlight! Thank goodness for my awesome design team making tough choices so I wouldn’t have to. 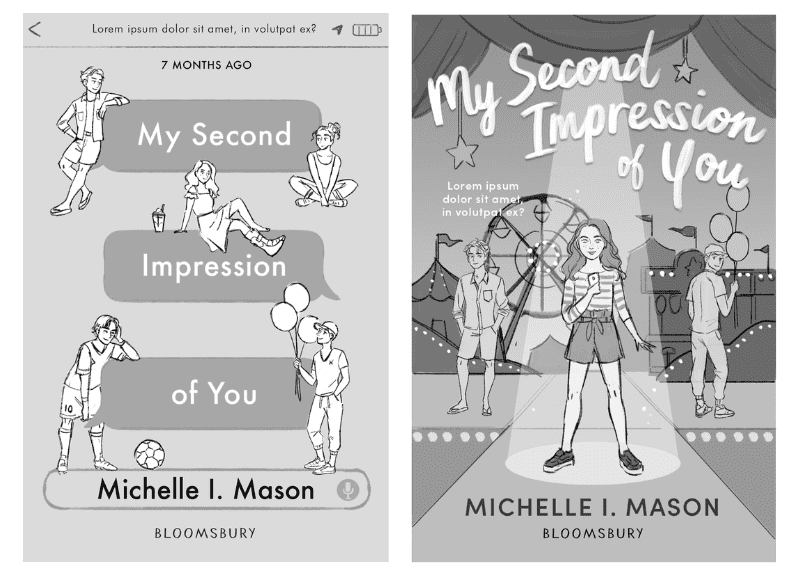 Once the direction was chosen, Jacqueline sent back a final rough sketch. It’s the main concept from the first sketch above, but Maggie is facing forward with a theater necklace like in the second, and it also includes the hand lettering from the second sketch. 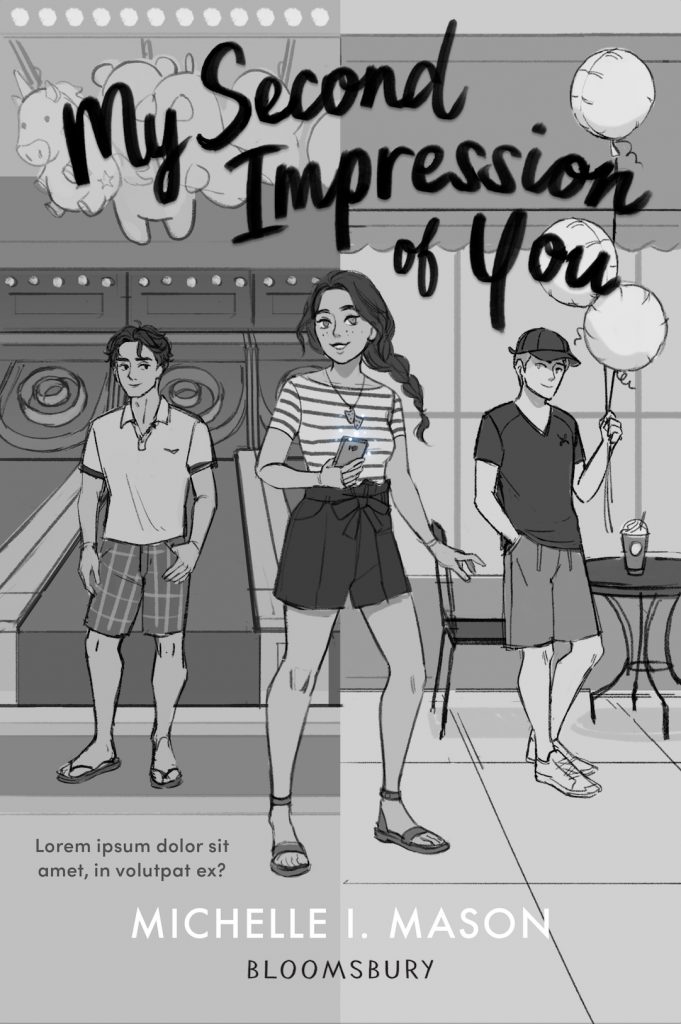 Book covers are a collaborative process from start to finish. At each stage of completion (rough sketches, revising the drawing, color palettes, etc.), feedback is taken from the team and author, and then incorporated into the next iteration to improve it. Besides looking pretty, there are different concerns a cover needs to address—for example, sales/marketing might want to ensure it stands out among other simultaneous releases—so many hands and minds are involved in the process.

Jacqueline makes a very important point here. During the cover process, my editor explained the design team’s thought process on several aspects of the cover, from initially choosing one cover direction because another was too similar to many others currently out there to removing background elements to ensure the title popped more.

Once the final rough sketch was approved, the next thing I saw was a color sketch–in a more muted version of what the final cover is now (far right below). However, Jacqueline also shared with me some of the other colorized sketches, and it’s fun to see the other options. They are the first two below.

After this rough color sketch, I saw the cover a few more times, but much of the tweaking happened between Jacqueline and the design team, with minimal input from me. Each time I received an update from my editor, there would be detailed comments from the designer, Jeanette, with requests for my input. My agent, Elizabeth, and editor, Allison, would also chime in on the discussion. As Jacqueline said, it was a very collaborative process!

Although you’ve seen it before, here’s the final cover 😍. 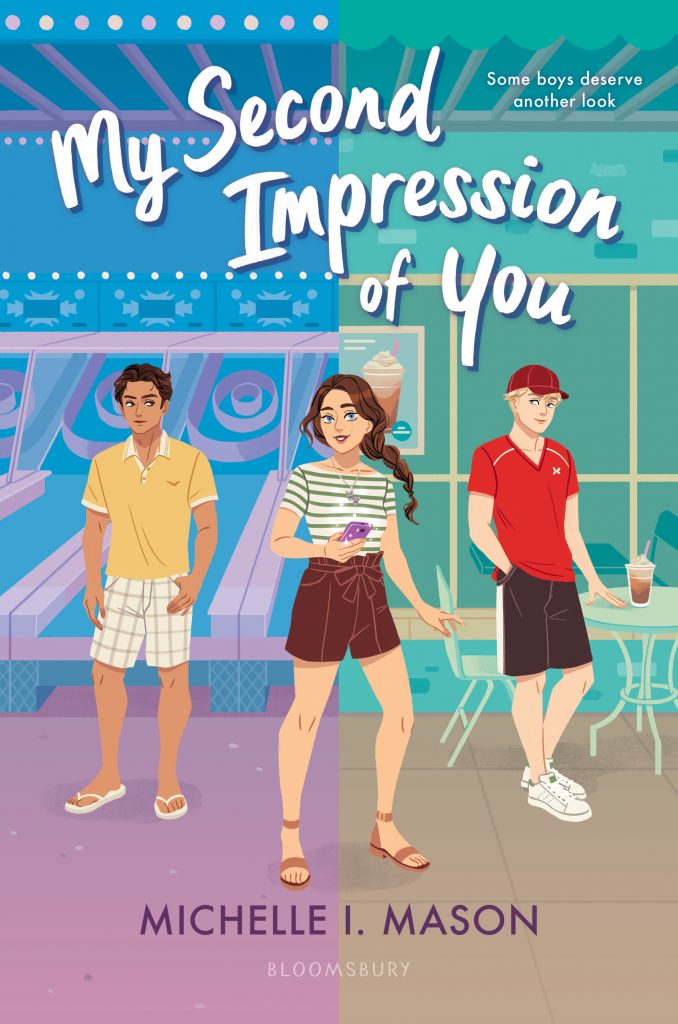 Finally, after my part is done, the designer or art director will take the finished artwork and create the rest of the package—designing the spine, back, and (sometimes) flaps of the physical book in a way that complements the art. It’s always an exciting surprise to see the final product on the shelf months later!

The final product is very exciting! I have seen a draft of the jacket, and I can’t wait to share it!I hope you found this backstage look at the cover for My Second Impression of You interesting. It was an absolute joy to chat with Jacqueline about the cover. I hope you love her art as much as I do, because she’s also designing the bookmark and stickers to go with it. 🎉🎉🎉

As always, I’ll remind you that the book is available for pre-order. You can select your favorite retailer on the My Second Impression of You book page. If you’re on Goodreads, you can also add it there. I can’t wait for you all to read this book!

Publishing Behind the Scenes: Interview with Cover Artist Jacqueline Li

On Binge Watching and Character Development